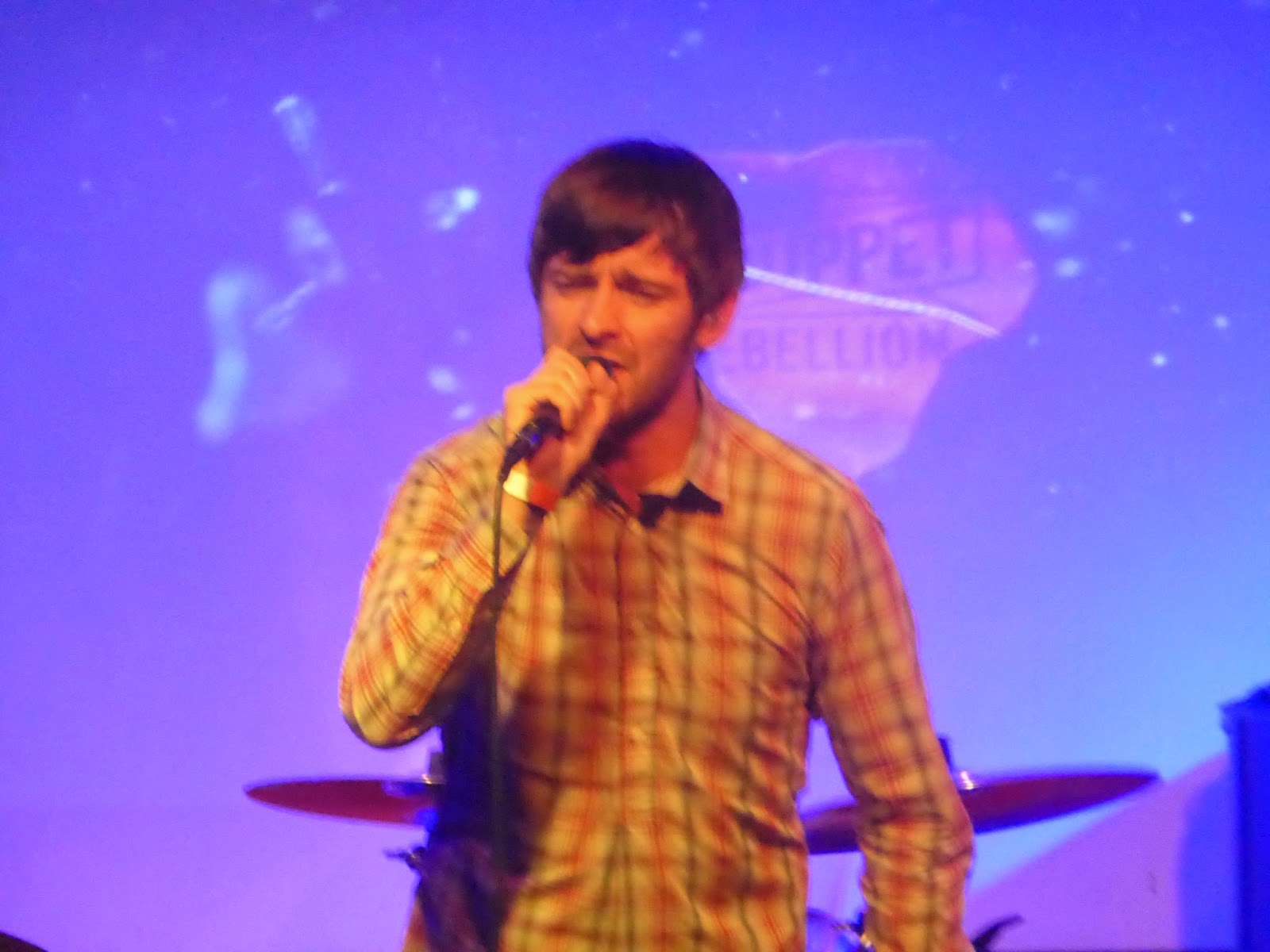 Four of the North-West's hottest new bands joined forces to sell out the Deaf Institute on Saturday night.  Headlined by Puppet Rebellion, the night showcased a wide range of new talent waiting to be discovered. 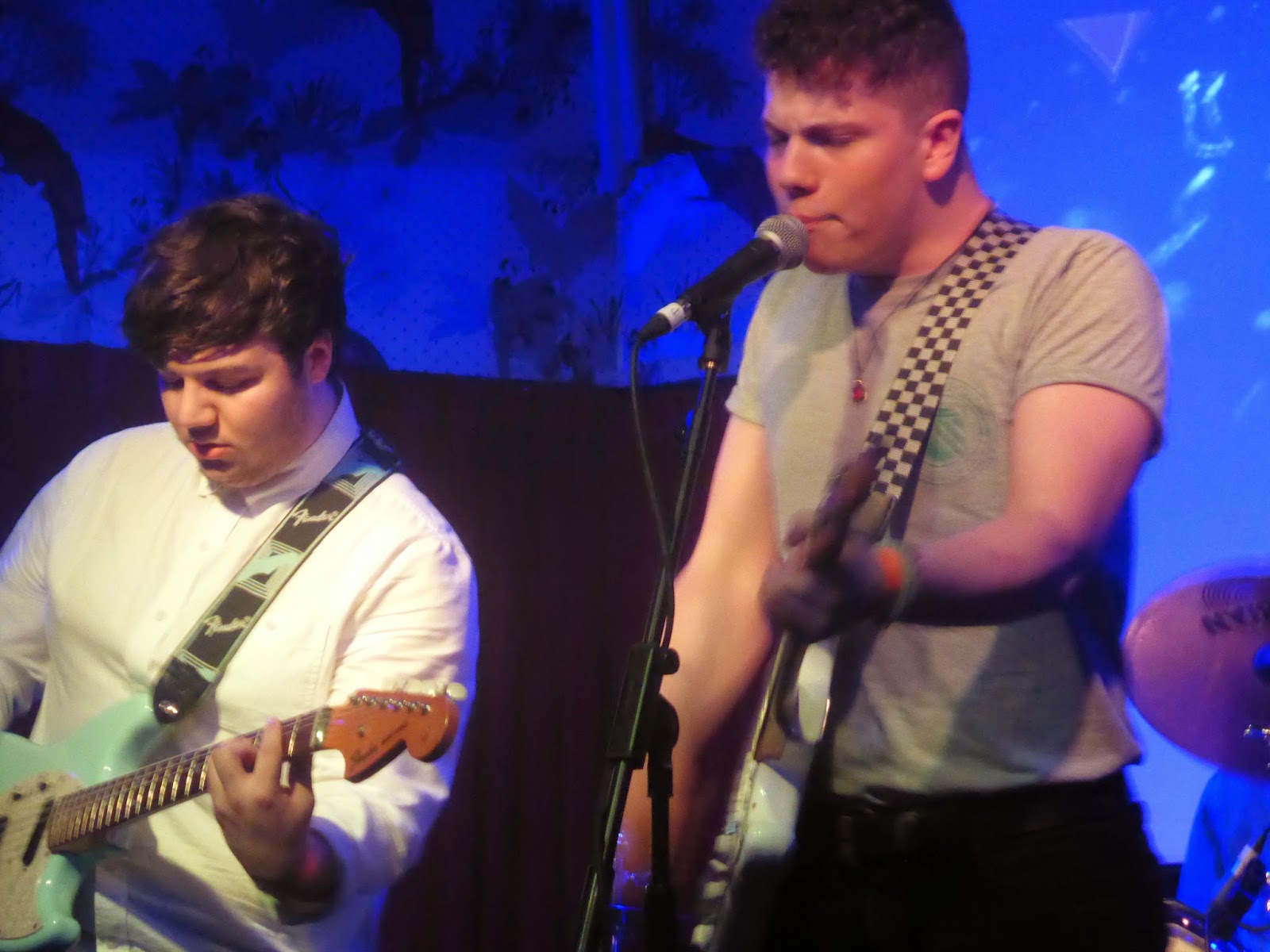 Opening up are No Hot Ashes.  Like the supposed golden slot on the NME Awards bill being for the next big thing, you have to think they've got something that could quickly catapult them beyond opening slots here to headlines in bigger venues.

Immediately you're struck by how tight they are as a unit, yet their music is extremely fluid, high-energy  mix of ska, folk, punk and snatches of freeform jazz and funk.  There's boundless energy around as well,  singer Isaac is a jack-in-a-box, leaping around the stage without losing track of the song or where he is.  Single Cigs and PG Tips is a belter of a tune, but potential future single Shoot Me blows it away with a pounding quick fire repetitive drumbeat around which frantic guitars dance ecstatically.   It's not all breakneck speed though as Skank emphasises their love of funk.   The Deaf is almost at capacity already and they love it.  They're definitely a name to watch out for. 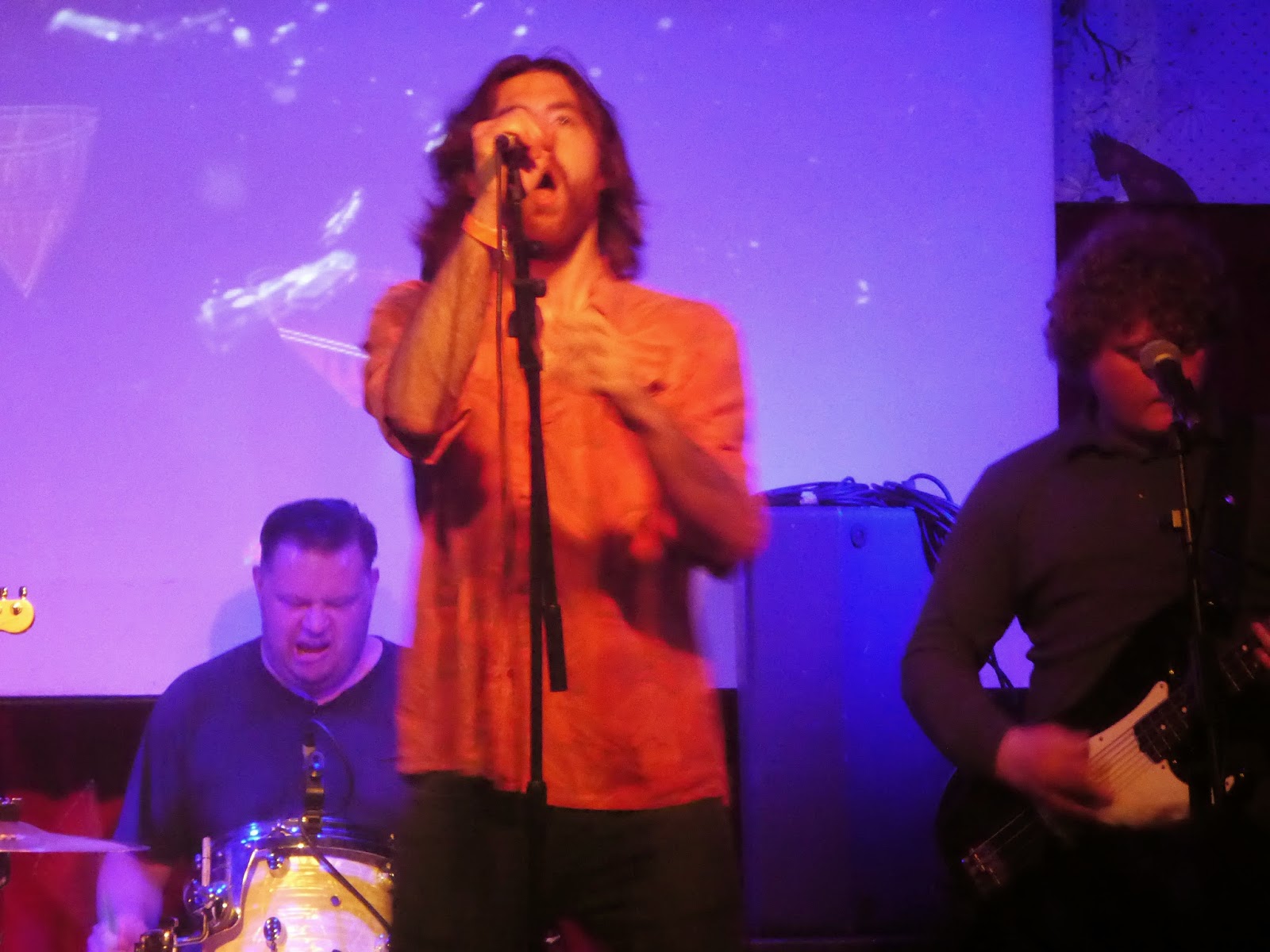 Next up are Stoke on Trent's Moscow.  Immediately you're struck by the imposing figure of singer Nic Andrews. He dominates the stage, throwing all kinds of Morrison poses, looking and sounding exactly how Tom Meighan thinks he looks and sounds and it's impossible to take your eyes off him.  They're full on rock and roll with hints of a darker punk and goth edge.  They trade in huge riffs and pounding drums that'll blow your head off, combining menacingly with Nic's vocals to produce a thrilling half hour of guitar driven rock.   We get a mix of songs off their two EPs - Hell Fire and Pack Animals, and it's the songs from the latter, in particular Killing Hope and Truth Vibrator that mark them out for bigger and better things. 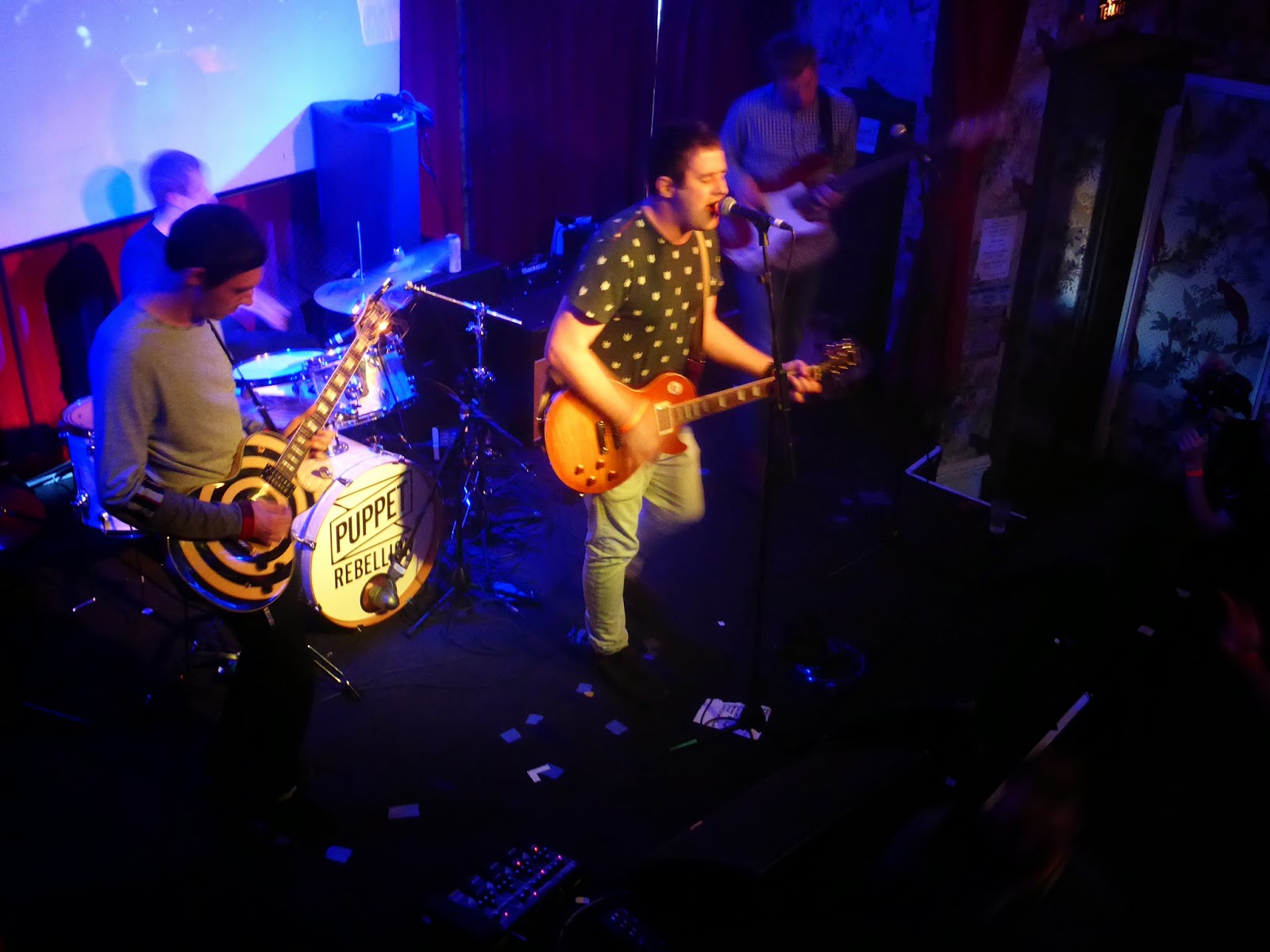 Penultimate band of the evening is Manchester's very own The Backhanders.   They've built a strong local following already and there's people down the front shouting "Backhanders Barmy Army".  They're still early in their development, but they've already become a very accomplished live band, rattling through ten songs at breakneck speed in their half-hour slot.  They wear their influences on their sleeves - Campfire, from their recent EP, is based off Joe Strummer's words but put to music by the band, but this isn't a bad thing when they're creating songs like Money and closer Love Like A Bomb.  Going forward, they may need to watch that they don't try to emulate their heroes too much - they also throw in a short section of The Doors' People Are Strange - and stamp more of their own personality on their songs as it's clearly there, but for now, they're still learning their trade and they have built their own audience and win over a lot more tonight. 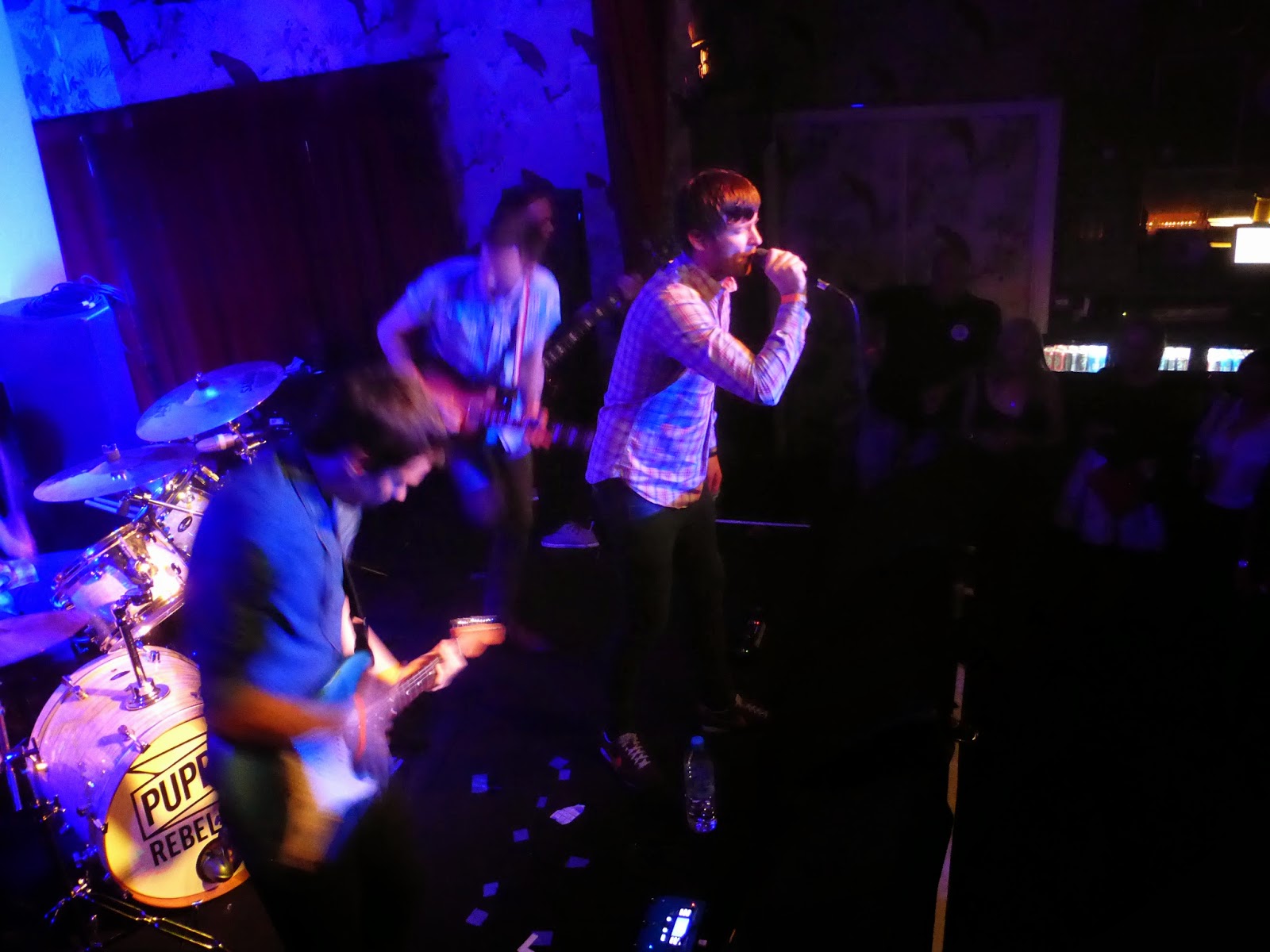 Finishing off the evening are headliners Puppet Rebellion.  Their star is continuing to rise, tonight's gig is sold out, a significant step-up from their last headline show at Gullivers earlier in the year.  They're slowly building their set up as well, adding in new songs, such as Way Ahead Of Fashion, Tame Imposter and It's Gonna Be OK, to allow them to play a longer set, without compromising on the quality of the songs, which bodes well for either future EPs or their debut album.

They start with Chemical Friends off their debut EP and, as well as the new songs, run through tracks off their recent follow-up Yes Means No, including Green-Eyed Monster and Pirouette which have clearly become favourites with the partisan crowd.  Their confidence has grown, front man Simon has a much more in your face stage presence and the sound has hardened considerably since we first saw them a year ago, the twin guitar approach beefing up the live versions of the songs compared to the studio.  It also feels unaffected by the recent change in drummer and they look like mates having a blast doing something they love, which is always a recipe for a great show.

They finish the set with what's becoming their big anthem off the debut EP, The Greatest Lie Ever Told, and it sees Simon in the audience and the crowd around him joining in and they know every word.  It tops off an evening which has seen them comfortably make the next step up.

A well-respected local music legend recently said he wouldn't come to this gig because the bands hadn't played 100 gigs and therefore wouldn't have developed their sound. He couldn't be more wrong - these four bands have enough energy and excitement in their sets to smooth off the very few rough edges there might be.  There's nothing more thrilling than capturing great bands in venues this size (and smaller) before some of them go on to bigger, and not necessarily better, things.