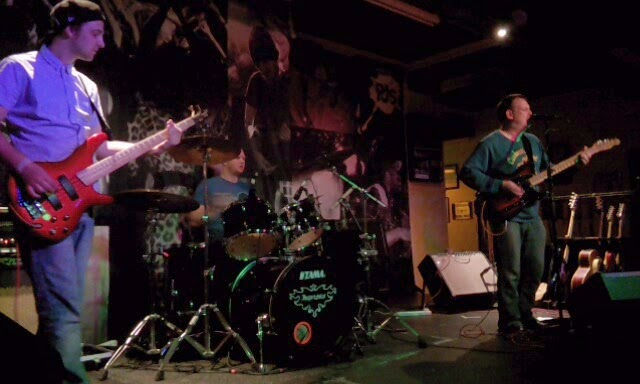 Former Inspiral Carpets vocalist, and regular visitor to Fife on his non-stop solo acoustic tour, Tom Hingley brings his new band to Scotland for the first time. Stuart Ralston visited PJ Molloys in Dunfermline and was impressed with both the set up and the band.

PJ Molloys is music venue / pub in the town of Dunfermline. As a venue, it easily betters some of Glasgow's more famous establishments. A great in-house desk and PA system, good views of the stage, 2 bars, and friendly staff. This was my first visit but I will be back again.

Tom Hingley is a familiar face around these parts, visiting the Kingdom of Fife regularly as a solo artist. His sets range from greatest hits to hidden gems from his extensive post-inspirals back catalogue.

Tonight though, we are treated to a set drawn heavily from the excellent 2013 albums "Sand" and its companion piece "Paper", which was recorded with his friends from the now defunct The Lovers. Hingley has recruited a new young rhythm section featuring Malcolm Law on drums and Ste Pearce on bass for this tour. The chemistry between the three is evident from the off as they rock their way through Suckcess from the Paper long player. Pearce's funky bass is reminiscent of Tom's old mucker Martyn Walsh.

Leaving It All Behind slows the pace down with Hingley delivering a powerful, heartfelt vocal. Old The Lovers track Hole features next and despite being more than 10 years old is reworked and sounds as fresh as ever. Despite delivering 2 long players last year, Hingley has already written new material and includes several new ones tonight including White Sheep which opens with Tom on harmonica. It has a bluesy, improvised feel to it, clocking in at around seven minutes, and shows how well the trio bounce and feed off each other.

Some of Hingley's solo acoustic songs have been reworked for this band and The Gloves Are Off benefits from the full band treatment it receives tonight. The Gloves Are Off is sequenced with new one Beggars Hand and by now the band are on fire, locked in a groove that I have never seen with Tom in his earlier bands. Beggars Hand is the set highlight for me. Bullet, another new one, has touches of The Pistols to it.

The set concludes with another new one and two classic cuts from Paper, the beautiful Soul High, which showcases Tom's vocal range and Nobody's Friend before an electric interpretation of the stand out track from the excellent 2009 Thames Valley Delta Blues album, namely I Don't Want To Be A Fighter. The band improvise the end, stretching it out for nearly ten minutes. A great way to end the set and displaying what a fine lead guitarist Tom is.

I reviewed Tom's albums last year and hoped he would get a new band together to showcase this material. I am delighted he has. With a real chemistry between the band and some excellent new songs, it will be interesting to see what happens next.