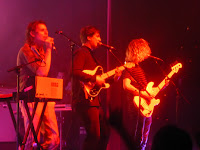 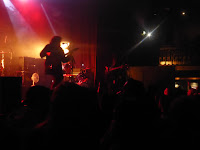 Cabbage's biggest headline show to date came on Saturday at a sold-out Ritz in Manchester in front of a hometown crowd.

This is also The Blinders' biggest show to date but there's no sign of any nerves as they come out to face a baying crowd to whom their aggressive snarling finesse. There's always a nagging doubt as to whether bands will be able to translate what works in a hot sweaty small venue to cavernous spaces like this yet it's clear they harbour no such doubts themselves as The Ritz's bouncy dancefloor is put to the test from the off.

In a crowd that seems determined to sing, well chant, that Jeremy Corbyn song at every opportunity, their songs, like the headliners, channel that energy through music that talks to people. Swine, with its "there is no hope" refrain, used to be the standout track in their live show but now there are no highlights because they simply hit the ground running and don't stop until they've won over a whole new army of admirers.

Cabbage's trajectory has been nothing short of astonishing. From a ramshackle rabble at their early gigs to a man and his dog that made you scratch your head at how they'd ever end up in a venue like this, this now feels like their natural home. The likes of Kevin and Dinner Lady, the two songs from their debut Chou EP, still possess that tongue-in-cheek dark humour that pervades their newer material and have made the transition from dank piss-smelling sheds to this dancehall and its fading glamour. Getting fifteen hundred people to sing about wanking in a quiche must rate as one of the most surreal events in its history.

The songs that make up Young Dumb and Full Of... form a large part of the set. The three singles Terrorist Synthesiser, with its almost jaunty singalong chorus, Necroflat In The Palace and the set-closing Uber Capitalist Death Trade see young and old come together in one heaving sweating mass. And that's what Cabbage have done so brilliantly well. They've harnessed the anger of people with the political and social system and channelled it through music that reminds those of us longer in tooth of the energy of punk and its fallout whilst leading the charge among the younger audience thirsting for something a little, make that a lot, more than the man in London has to offer.

Dissonance, Tell Me Lies About Manchester and Because You're Worth It simply make the case stronger that Cabbage are no chancers stealing a ride and the three songs from their forthcoming Extended Play Of Cruelty EP show they're not going anywhere soon. The Corbyn chants start up again, but as their Healing Brexit Towns Experiment tour suggests they're not simply an extension of that particular movement, however much the likes of The Sun want to paint them as a band to keep your kids away from.

This is one unquestionable triumph. Whilst Blossoms pack out Castlefield Bowl up the road next weekend, The Slow Readers Club are showing that persistence and quality anthemic songs will eventually win the day and the likes of Larkins and No Hot Ashes look like making the step up into this type of venue soon, there's a feeling that the city's music scene is rising again. Cabbage, along with adopted sons The Blinders and Ist Ist, are showing that we can still do things differently.

Email ThisBlogThis!Share to TwitterShare to FacebookShare to Pinterest
Labels: Cabbage, The Blinders