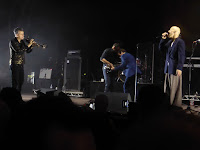 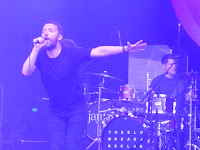 James made a triumphant return to their hometown of Manchester last night in front of an 8,000 crowd that braved the rain as some of the city's favourite sons ran through a career spanning set full of surprises, reinventions and curveballs as well as some of their best known and best loved songs towards the end of a two-hour set. Support came from Manchester's newest local heroes The Slow Readers Club who won over even more admirers with a forty-five minute set full of the kind of anthems that made the headliners name for them.

The arena bowl is pretty much full to capacity as The Slow Readers Club take to the stage to the now ubiquitous chants of "READERS". From the very opening bars of Start Again, they look and sound perfectly at home up there, their big anthemic tracks from their self-titled debut and its follow-up Cavalcade. The words are now being sung back to them at a volume that at times threatens to drown Aaron out, such is the connection that they've made with the James fan base after last year's support slots and now to a much wider audience as their Autumn tour is already starting to see sold out signs going up even before the release of any new material that they're working on. 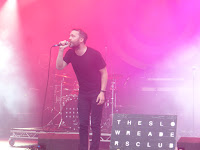 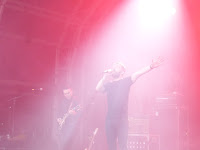 Tonight isn't about their new material though, it's a celebration of a very Mancunian sheer bloody mindedness and self-belief that's seen them never waver in their belief of what they do as they knew their reward would come one day. It's not beyond the realms of possibility that they may come back here one day as headliners such is their trajectory at present. It's a set full of highlights, a set full of songs that should be dance floor and A-list regulars being delivered with a grace, precision and confidence that all the biggest bands in the world possess. One More Minute, Forever In Your Debt and I Saw A Ghost probably are the stand outs but you could make your case for any three in the set. It feels like they're about to do what James did in 1990, something that probably isn't lost on Jim or Saul who've supported them so vocally. However what they've achieved so far and will achieve in future is down to their own hard work and of course the songs, because no band is anything without them.

The Slow Readers Club played Start Again, Sirens, One More Minute, Days Like This Will Break Your Heart, Block Out The Sun, Plant The Seed, Feet On Fire, Forever In Your Debt, I Saw A Ghost and Know The Day Will Come.

This type of stage was made for James and tonight they deliver possibly the finest hometown show we've seen them deliver. There's something for everyone in a set that spans the best part of three and a half decades from their Factory single Hymn From A Village, that still sounds as fresh and vital as it did when it came out through to a brand new song called Busted that is being played for only the second time and which makes us firmly believe that this is a band with years still left in their tank with their creative spark burning stronger than ever rather than dimming with age. 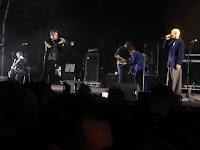 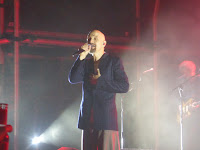 They start with Walk Like You, the seven minute opener of La Petite Mort. For any other band you'd think the easy option would be to win people over with a big hit to start, but James refuse to play by the conventions of what is expected, even in a venue of this size with an expectant Friday night crowd. James fans get this though and celebrate their difference. How Was It For You? has that riff that forms the real core of the songs ripped out of it, its guts slowed down into something very different from the original and magical. Fans stand open-mouthed at the audacity of what they've done to it before diving in.

And diving in is just what Tim does as he comes out into the audience for the first time for Catapult, the first of two songs from last year's number two album Girl At The End Of The World, making a connection with the fans who lift him round and then send him heading back to the stage. These songs don't feel out of place next to anything they've done before and the songs that the casual fan demands from them which they get later in the evening. Dear John is a shimmering, shiny, but devilishly dark story of love lost and breakdown.

Five-O, led by Saul's stunning violin solo, is jaw-droppingly beautiful and delivers an intimacy that's a million miles away from what should work in this environment, but then James are no ordinary band, love or hate them. The aforementioned Hymn From A Village ushers in Getting Away With It (All Messed Up) which sees Tim out crowd-surfing again, almost getting dropped this time as people reach for their iPhones rather than holding him up, something he's already chastised people gently for after his first foray.

They then play Sometimes, so often and regularly the set closer, and the crowd take the song and make it their own, the band standing and watching and listening to 8,000 Mancunians and adopted Mancunians singing back the refrain for what feels like an eternity, in unison and as one. Tim talks about the magnificent Arcade Fire the night before and their professionalism and that James are about to do the opposite and they play new song Busted as well the shortened version of La Petite Mort band favourite Interrogation.

They then zigzag their way from hit to fan favourite for the rest of the main set. Born Of Frustration is met with the audience mimicking Tim's Indian yodel whilst Andy's trumpet fills the now darkening night air as drizzle starts to fall. No one cares at all. Tim stops to remember those that were killed at the Arena a couple of months ago by dedicating a beautifully poignant Stripmining, itself written about the 1985 Mexican earthquake disaster, to the victims and the city. Before though he has to tell people off for throwing bottles because this is a peaceful concert and where we're stood it's just that, a coming together of like-minded people bonded by the music of the eight men on the stage. 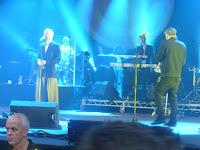 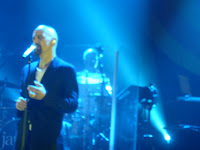 She's A Star remains in its stripped-down semi-acoustic form and feels all the better for it whilst Of Monsters And Heroes And Men feels even more poignant as the rain starts to come down a little harder. Yet no one cares, such is the intoxication in the music that this celebration causes. Moving On sees people around us in tears given the subject matter (we'd done our tears during Stripmining, a song that got us through some hard times when it came out in the late 1980s). Attention is even more potent, powerful and dark in this cavernous bowl whilst the train that sits delayed on the viaduct that over looks us get a spectacular view of a song that takes us on a wandering journey.

We think that's it for the main set but no, they conjure up a spectacular and massively unexpected Sit Down. The whole place goes absolutely ballistic as it's not often played these days, and it's the element of surprise that makes it so special. And whether it's been overplayed or not, it is special.

The encore starts with Nothing But Love, the lead track from last year's Girl album, and the barber shop quartet backing vocals are taken on by eight thousand applicants for the job. It's a song that, like Moving On, has done so much for the band to help them avoid the unhelpful and plainly insulting heritage tag that bands of their age often get given. It's back to the 1990s for the finale though, Come Home is probably more ragged and jagged sounding than it's ever sounded, but that's what makes it so perfect and Laid, which replaces Sound that Saul tries to start as it was on the setlist, sends the whole place into one heaving slightly wet mess.

Tim tells us half way through that Manchester is still home, twenty years since he lived here. James are, despite none of the band living here any more, the embodiment of this city. As Tony Wilson said, we do things different, and James do that. Welcoming anyone into the fold, open to new and exciting developments and always willing to take the risk. You can keep your Roses, New Orders, Courteeners, Oasis and Mondays, James are the encapsulation of the greatest place on earth.

James played Walk Like You, How Was It For You?, Catapult, Dear John, Five-O, Hymn From A Village, Getting Away With It (All Messed Up), Sometimes, Busted, Interrogation, Born Of Frustration, Stripmining, She's A Star, Of Monsters And Heroes And Men, Moving On, Attention, Sit Down, Nothing But Love, Come Home and Laid.