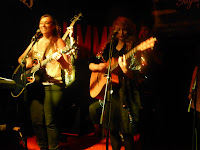 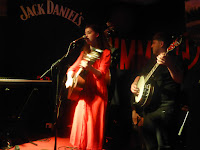 To celebrate the launch of their new video for single Midas Touch, Taylor And The Mason threw a Sunday night party at Jimmy's featuring a set from themselves and the stunning Tennessee influenced sounds of Izzie Walsh and her band.

Following on from the release of her debut EP The Curse earlier this year (review here), Izzie and her band's set is something of a revelation. The immediate thing that strikes you is her voice - soulful, powerful and possessing a range that makes it all seem quite effortless, but you sense people stopping their conversations and moving forward to hear more within the first song of her seven song set.

A great voice means little though if there aren't the songs to back it up and fortunately the six originals they play, including all three from the EP, are forceful in their impact, whether it be in the quieter moments or when the double bass and banjo are let loose and the songs dance around the room. New songs Silver And Gold and Trees stay true to the style of the EP tracks, but have life and personalities all of their own. Their cover of Johnny Cash's Folsom Prison Blues is something of wonder as well, a song that you shouldn't really take on, but one that Izzie's voice turned into a major triumph. Whilst the style of music might be contrary to the scene that's filling Manchester venues at present, Izzie and her band are going to start to turn serious heads soon. 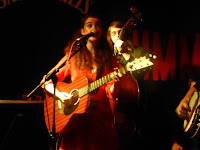 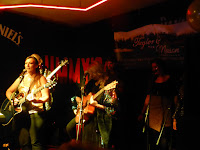 It's a tough act for Taylor And The Mason and their assembled band to follow, starting with breaking the record for most people crammed onto Jimmy's stage. The magic in their sound is the way that they combine their two very different voices and two backing vocalists who could front bands in their own right as well as guitar, keys, violin and a cajon without their songs ever feeling overloaded with either musicians or voices.

Their set is made up of tracks from their self-titled debut album, starting with Midas Touch, the single and the reason why Jimmy's and the band are bedecked in gold, glitter and capes. It's an approach that's replicated in their live show - Becky and Sally (for they are Taylor and Mason respectively) never let a grin leave their faces, whether it's mid-song on the wonderful Gin In Berlin, a song so stupendously fun you'd have to be dead not to end up tapping your feet and beaming along with them by the end as it takes its final twist and turn, or whilst they're joking about crowdfunding for a second guitar for Sally to cut down on between song tuning.

They also possess an ability to deliver songs with an intimacy such as the old Medieval English song Summer Is A Coming or the slow building drama of Midas Touch as well as with the rumbustious raucous energy of Firefly and the set-closing Little King. Their two voices both contrast with the other, but also complement themselves and the songs possess an innate knowing of just the right moment to change pace or direction. They're a real joy to watch, their infectious energy sealing the deal for anyone not already utterly charmed by the disarming nature of the songs.

The evening finishes with the unveiling of the Midas Touch video filmed at the Albert Hall, which was our Track Of The Day yesterday.

Taylor And The Mason's official site can be found here and they are on Facebook and Twitter.

Email ThisBlogThis!Share to TwitterShare to FacebookShare to Pinterest
Labels: Izzie Walsh, Taylor And The Mason