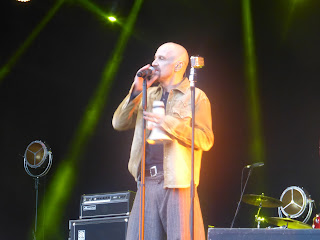 James joined Passenger, Razorlight, All Saints and Mary J Blige as headliners of this year’s Kew The Music festival week in the picturesque surroundings of Kew Gardens in London. Despite a sound level that would struggle to fill our living room and an audience that in the most part were more interested in their hampers and protecting their picnic blanket than they were about a rock concert, James refused to compromise and deliver the greatest hits set that the evening’s compere promised.

As a very bizarre prelude to the main event, the compere came on and gave us a very strange preamble and potted history of the band, which summed up what Kew The Music is about. This is a festival in the loosest sense of the word, as if the music is almost a secondary thought, there to finish off an evening of sitting around on the grass drinking and eating – so polite and un rock and roll that we were allowed to bring in glass bottles of wine - rather than the type of intense gig James have been putting on recently. The designated dancing area wasn’t even full. The uproar that unfolded post-gig on social media that Sit Down wasn’t played tells it own story of the expectations of the crowd. 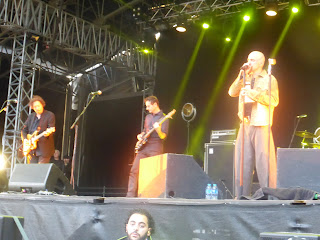 Anyone who knows James know that they’re not that type of band. Their aim is to challenge the audience by challenging themselves and not doing the obvious. Whilst the likes of U2 and the Manic Street Preachers do full album shows and tours yet reap critical acclaim for doing so despite it betraying a lack of adventure and fresh ideas, James are having none of that such nonsense. They play new songs, tonight’s new one Backwards Glances absolutely unsuited to a reveal in an open air stage like this because of its intimate fragile structure makes it four from their recording sessions to have been previewed in recent shows. That is what James do, what makes them unique and most probably makes them any mention of them in conjunction with the swear word heritage frankly insulting.

It’s against this backdrop that James take to the stage after Andy Diagram has done a trumpet solo introduction, thankfully this time not trying to induce an “oh Jeremy Corbyn” singalong, possibly for fear of people choking on their prosecco and quiche in apolepsy. They start into Sound and the volume is ridiculously low, something Tim later acknowledges is set by the venue and licensing authorities – for most of the set this isn’t an issue but it’s telling in the quieter moments when the crowd are less familiar with the songs that it’s an almost becomes one.

James take the hard road to contend with this – a soaring Moving On, on a par with any of the hits of their supposed hey-day – ushers in a series of songs that are the exact antithesis of what the organisers and the compere had promised. Interrogation is biting, snarling and vitriolic despite the volume, Hymn From A Village sees Tim come and do a walkabout amongst us, going up to the seated people and challenging them to move and How Was It For You is stripped back and down almost into a folk song.

There’s a moment in Five-O where Tim goes to Saul and the two stand almost eyeball to eyeball, lost in the music and almost oblivious to several thousand people around them. It’s magical moments like this where James make themselves stand out from every other band in the world.  Catapult, from last year’s number 2 album Girl At The End Of The World let’s not forget, is proof, if any were ever needed, that James are in possibly the most creative and exciting phase of their existence currently, refusing to lie back and churn out endless versions of themselves to please the casual fans, but defiantly creating something that they know will enhance rather than damage their legacy. As stated before, Backwards Glances is possibly a foolhardy move, but this is why the band’s most devoted fans love them, as Tim reads the oven fresh work in progress lyrics from a sheet as Adrian, Ron and Andy huddle round a microphone to deliver vocal harmonies. 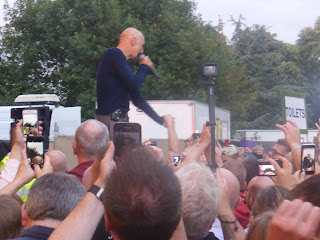 Born Of Frustration is ecstatic even with the imposition of the sonic limitations that the crowd more than make up for, whilst She’s A Star, dedicated to The Queen for some reason, is stripped down and soothing, and Of Monsters And Heroes And Men’s tales of rambling preachers and poets and manic visions builds to a magnificent crescendo.

Tomorrow, a new addition to this summer’s setlists, is as fast and furious as ever, even getting some of the reserved enclosure standing and some picnic blankets danced upon. There’s young kids down on the barrier singing along to every word, often better than their parents, a sign of James’ connection with all ages and a new set of fans who have no hazy recollections of sitting down on a beer-stained dance floor in their long-sleeved JA-M-ES shirts and no desire to be part of reliving or trying to recreate something that lives in the past. Attention is a perfect example of how James are still that untoward awkward experimental band that no one ever gives them due credit for. Sometimes gives the masses the singalong they crave, the band completely drowned out at the end.

The encore is a four-song blast of the nostalgia that the compere foolishly promised. Getting Away With It (All Messed Up) is now one of the most recognisable James’ songs despite its issues in really troubling the scorers on release due to the record label relationship at the time being pretty much non-existant. Come Home is at its best when it’s on the edge of breaking down, the more unstructured and chaotic the better, whilst Nothing But Love has the cocksure arrogance of a young centre-forward fearlessly running at a veteran centre back knowing that they’ve got their measure, such is the connection it’s made with James’ current fan base as a new era single. Laid sends everyone home with a smile on their face, other than those that demanded and didn’t get their greatest hits bonanza. 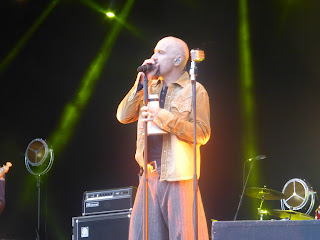 This wasn’t the easiest gig James will ever play, working conditions weren’t in their favour, but they’re not a band to just lie back and take the easy route out. The setlist wasn’t full of crowd-pleasers, but anyone who knows this band, and even more those that understand them, should know that they’re never going to be dull performing monkeys like so many of the bands that are rightly deemed heritage bands have become. James are a living mutating beast, evolving constantly, reinventing themselves, turning themselves inside out and twisting themselves round and round. This wasn’t their best gig by any length, and came nowhere near matching last week’s Castlefield outing, but it was certainly one of their most defiant and agenda-setting.

James played Sound, Moving On, Interrogation, Hymn From A Village, How Was It For You, Five-O, Catapult, Backwards Glances, Born Of Frustration, She’s A Star, Of Monsters And Heroes And Men, Tomorrow, Attention, Sometimes, Getting Away With It (All Messed Up), Come Home, Nothing But Love and Laid.