Track Of The Day : SKIES - Green 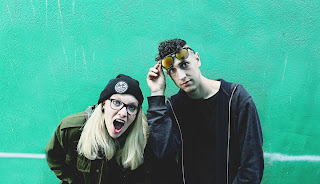 SKIES release their new single Green accompanied by a simple but fun video. The Folkestone two-piece are set to return to the North for a Head For The Hills festival preview show at Bury Met on August 5th before playing the festival itself in Ramsbottom on 15-17th September.

The song captures the high-energy rush of their live shows that have seen them charm fans across the country at their own headline shows as well as supporting The Slow Readers Club on their tour.

According to the band  ”the song was originally about being single and learning how to be alright with that. Over the last year, the lyrics have also come to represent our views towards being in a completely independent band too! As an independent band, it's been great also working alongside a lot of independent businesses on the journey - from our producers and video directors, to clothing companies and local creative organisations. You get a real sense that we're all in it together and all building something together."