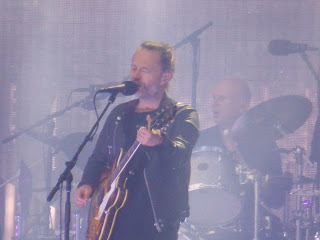 Radiohead's two Manchester Arena shows had been combined into one after the tragic events of May 22nd and moved to Old Trafford Cricket Ground, a very different setting as most of the show was performed before dark and with noise restrictions imposed to protect local residents. Despite this and a set that provided a stern challenge to the attention span of the casual fan, the quality of the musicianship and their unflinching desire to not play by the standard rules of the stadium gig.

With their recent Glastonbury headline slot splitting opinion down the middle between descriptions of genius and accusations of self-indulgence, they headed to Manchester for this hastily-rearranged show. The cricket ground is far from an ideal place for a gig of this nature - firstly the sound quality and volume is such that the likes of You And Whose Army?, the opening of Pyramid Song and Daydreaming and the other more delicate moments of the set are often drowned out by the sound of aimless chatter from those waiting for the big songs from OK Computer and The Bends and where we're stood from those who acted like they'd never been to a gig before in their life and secondly we only really got the benefit of the exhilarating live show when it finally went dark during the encores. It takes a lot to say that this gig would have worked better in Manchester Arena, but the truth of the matter is that it would had circumstances permitted. 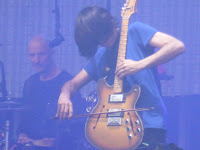 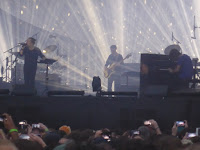 If Radiohead had taken on board those criticisms of the Glastonbury set, then it wasn't really demonstrated tonight, and quite rightly so. It is that uncompromising approach to their art that makes them one of the few genuine unique acts of this size in the world today. It would have been easy this year to follow U2's lead and go out and tour OK Computer, given its reissue, and whilst it's the most represented album in the set including a glorious Paranoid Android that possesses even more of the schizophrenic chaos of its recorded version performed live and a night-closing Karma Police that Thom encouraged us to sing even after the band had departed the stage, they never once rest on their laurels. In the main body of the set in particular they seek to challenge the audience, a brave move in a bowl of this size, as they challenge themselves by changing the setlist every night - they'll drop something like Airbag and follow it up with 15 Step or No Surprises and then follow it up with Bloom off The King Of Limbs as if to stick two fingers up to the accepted ways of going about these big shows.

They've never been huge communicators during the set, although Thom asks us to help him out if he forgets the words to The Bends which gets its first outing of the year, yet they don't need to have that between song rapport with the audience that so many rely on when they let their music do their talking for them. Ful Stop, Myxomatosis and a glorious Weird Fishes / Arpeggi may not be the most obvious stadium fillers and yet, despite the volume dial needing to be turned up, make perfect sense in the context of what Radiohead are about. 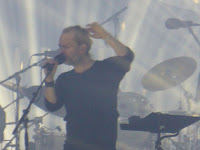 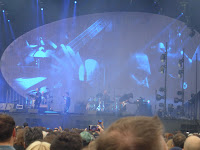 When it comes down to it, you either get Radiohead or you don't. They're not a band to dip in or out of and they're certainly no easy listen once you get past OK Computer in their discography. What's beyond dispute is the intricate detailed nature of their art and their ability to recreate the intensity and power of it live even in such difficult circumstances as tonight. They're the most awkward globe-trotting stadium band around and that's why so many of us love them.

Radiohead played Let Down, Lucky, Ful Stop, Airbag, 15 Step, Myxomatosis, All I Need, Pyramid Song, Everything In Its Right Place, No Surprises, Bloom, Identikit, Weird Fishes / Arpeggi, Idioteque, You And Whose Army?, Bodysnatchers and 2+2=5 with a first encore of Daydreaming, Nude, Lotus Flower, Paranoid Android and Fake Plastic Trees and a second encore of There There, I Promise, The Bends and Karma Police.

Email ThisBlogThis!Share to TwitterShare to FacebookShare to Pinterest
Labels: Radiohead