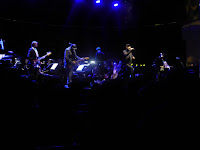 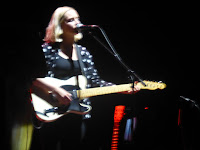 As part of the celebration of the 20th birthday of iconic independent label Bella Union, Mercury Rev announced three special dates with the celebrated Royal Northern Sinfonia. We caught their show at Gateshead Sage, home of the Sinfonia, a mix of tracks from across their career with a bit of Disney and Dusty Springfield for good measure. Support came from Hazel Wilde of Lanterns On The Lake playing her first ever solo show and revealing four new songs.

The Sage is the perfect setting for a show of this kind. When James toured with the Orchestra Of The Swan in 2011, the Sage was our favourite venue and this feeling was confirmed when we saw Hazel’s band Lanterns On The Lake perform here last year in a stunning show with the Sinfonia.

Hazel walks on stage almost unnoticed and sits herself down at a set of keyboards and tells us “This is my first time playing solo so be gentle.” There’s clearly lots of local support for her in the room tonight, not that she needs it despite the obvious nerve-wracking experience of performing solo in an auditorium of this grandeur and performing new songs for the first time.

If there are any nerves, they don’t really show. The audience, other than those coming in between songs, are so quiet, the sound in the hall so beautifully pitched that when Hazel sings to the subject of opening song Every Atom “if I had to split every atom just to find a trace of you, that’s what I’ll do,” it sends a haunting chill through us as the expression in the vocal accentuates the impact of the words. These songs feel so fragile in this environment, yet it’s that delicacy that makes them so beautiful. The band may take them away in a different direction, but Understudy, with Hazel now on guitar, and its talk of not being sure “where real life starts and what is pretend” is so achingly emotional it almost hurts to listen as she pours out her heart. 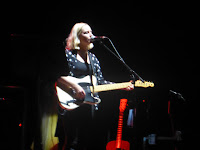 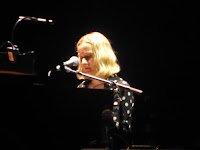 Ships In The Rain, from Lanterns’ debut Gracious Tide Take Me Home, is equally heart-wrenching, although has the benefit of familiarity. The audience’s attentiveness as the sparse guitar gives way to a song drenched in blurred romantic ocean references that feel even more poignant with everything else stripped away. Hazel returns to the keyboards for the third new song Before They Excavate, a plea from a dark confused place to a potential beau to let go and dive in “let’s break into our old school and race through the halls.” Once again, this raw naked environment makes each and every note set the hairs of the neck up on the end and leaves us breathless and exhilarated.

The fourth and final new song is Baddies, described as “another happy one”, feels a little upbeat despite its opening “here come the baddies on a wave of hate” as it’s got a fiery defiance running through it that is evident despite the stripped down nature of the performance. Hazel finishes with Green & Gold (one of our favourite Lanterns song – check out the versions on their Live With Royal Northern Sinfonia or the Generator Session on YouTube) and it’s all we can do hold back a tear, such is the simple intensity of both the song and the performance. After uncertainty about the band’s future after statements at the end of the last tour, it’s a massive relief to know that there’s still a creative spark glowing brightly at the heart of the country’s most under-rated and under-appreciated band.

Hazel Wilde played Every Atom, Understudy, Ships In The Rain, Before They Excavate, Baddies and Green & Gold.

It’s a lot for Mercury Rev to live up to, but they’re seasoned professionals and they also have the dramatic impetus in their music to make a collaboration with an orchestra an unforgettable experience and that’s exactly what they do.  The orchestra usher them on with a beautiful instrumental piece that segues into Central Park East. Immediately that drama becomes evident, the arrangements on the stand-out track from their last album The Light On You perfectly atuned to the tale of observing lovers letting go and hanging on and magic carpets touching down and taking off, the songs equally on the edge of implosion and explosion, held together by taut strings, rippling keyboards or a cushioned burst of brass.

The set moves almost unnoticed around their back catalogue without losing focus or continuity, the next track being a keyboard led and strings-drenched delightful A Drop In Time from 2001’s All Is Dream, once Jonathan has introduced the band, orchestra and joked about Gateshead surrounding Newcastle and short skirts and high heels. He pays tribute to Simon Raymonde, head of Bella Union who is playing guitar with them tonight, telling a story about being told he has the best ears in England, but is actually deaf in one, but not knowing which one. As Jonathan sings “let the music play” and the music dances its own magical waltz as he references Leonard Cohen’s mind, we’re utterly transfixed.

They go further back to a song that Jonathan tells us they’ve never played – Downs Are Feminine from 1993’s Boces. The magical thing about all the Sinfonia collaborations (John Grant, Lanterns) is how the songs are made to sound like they’ve always had the orchestra there without diminishing the role of the band and that taking them away would feel like some sort of criminal act, and again that’s where they leave us at the end of the song as the strings work their tricks over the refrain “and if there’s one thing I can’t stand, it’s up.”

Tonite It Shows, from Deserter’s Songs, is preceded by a tale of Jonathan taking the rise out of himself being the only person on stage who can’t read music and how that impacted on recording sessions where he pretended he could like a Gandalf on acid and what he’s learnt from this collaboration and the joy he’s getting from this is palpable. Hercules, from All Is Dream, follows and once again is transformed by the luscious arrangements that the Sinfonia bring to the piece, whether it be the quiet subtlety that underpins the opening verses or the building drama as the song progresses.

There then follows a conversation between Jonathan and Simon about The Cocteau Twins, joking about punk ruining Simon’s desire to learn classical instruments and his father Ivor, about whom Simon tells the story of how Dusty Springfield’s I Only Wanna Be You was originally written for Frankie Vaughan who rejected it, before inviting recent Bella Union signing Holly Macve on stage to perform a lesser-known Dusty song I Wish Never Loved You. Holly’s sultry smoky voice provides us with a magical interlude that will have us checking out her recent debut album Golden Eagle. 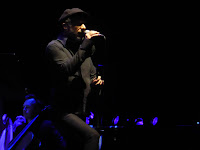 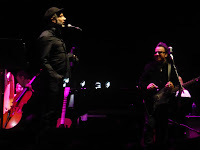 It’s hard to pick a standout track of the evening, such is the overwhelmingly high quality of the whole event, but pushed we’d go for Endlessly, again from Deserter’s Songs, where every last drop of pathos is wrung out of the song by the strings that wrap themselves around Jonathan’s half-spoken half-sung lament. Racing The Tide is pregnant with the drama that the strings and brass create, you feel that they want to let loose and throw the kitchen sink at it at points, yet it’s that restraint combined with the tension that has us rapt awestruck by what’s unfolding in front of us.

We’re then taken further back in time to pre-Mercury Rev days when Jonathan and Grasshopper were in Flaming Lips for There You Are from the A Priest Driven Ambulance album and it’s preceded by a tale of Jonathan convincing Wayne to go out onto a highway to record parts of a song. There’s no (or little) Sinfonia input on this song, but even without it, there’s no let up in the taut intensity of the performance and the song’s irregular yet somehow absolutely appropriate structures.

It’s back to Deserter’s Songs for Holes where the sparsely but majestically executed strings and brass elevate Jonathan’s dream-like vocals to even higher plains. There’s no need for big statements, songs to explode into huge chorus when it’s delivered with this level of emotional clarity and purpose. Jonathan jokes that they can’t just dive into the next song with a 1-2-3-4 Ramones style count in as people have turn pages over. Spiders And Flies starts similarly understated in its less-is-more approach and no less glorious is in its impact, flashes of something a little more intense coming to the fore where the words require it to do so. Opus 40 has a similarly impact, a string-laden intro that pierces through the reverent atmosphere inside The Sage. It's all we can do to not jump up and dance along to it.

The next song sounds familiar, but not one we immediately recognise until Jonathan starts singing Wish Upon A Star, the soundtrack to his days as a child and his real first introduction to music and something he tells us he'd always wanted to play as it was Disney as much as anything that made love music. It's a thoughtful fun touch in keeping with the rest of the evening's happenings which feel more like an event, a celebration and a spectacle than they do a mere concert. Mercury Rev close proceedings with The Dark Is Rising and finally everyone breathes deep and let loose in spectacular fashion, finishing with Jonathan standing behind conductor Hugh and waving his arms around wildly. The band leave to a standing ovation and then let the orchestra take their bow after a final instrumental.

This was an undeniable triumph, a collaboration of two great sets of musical minds coming together to revisit and reinterpret and to create something that leaves the audience breathless and feeling privileged that they were able to attend. There's a wonderful connection between Bella Union and The Royal Northern Sinfonia, the former one of the most inventive, creative and risk-taking labels around and the latter an orchestra that isn't constrained by the normal boundaries of what an orchestra should do. Let's hope that this, like Hazel's band's performance last year, sees the light of day as a physical release. Until then, it'll remain etched in our heads.

Mercury Rev played Central Park East, A Drop In Time, Downs Are Feminine, Tonite It Shows, Hercules, I Wish I Never Loved You, Endlessly, Racing The Tide, There You Are, Holes, Spiders And Flies, Opus 40, Wish Upon A Star and The Dark Is Rising.