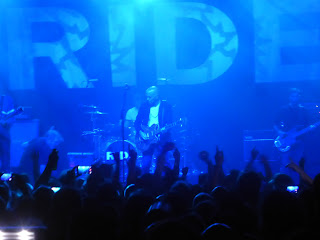 Ride released their first album in twenty one years last month in Weather Diaries and announced this one-off Manchester International Festival show at The Ritz. An expectant audience were treated to a set that got the balance between new and old spot on and revealed them to be one of the few bands that have reformed to match, and at points exceed, former glories. Support came from Spectres.

The crowd is disappointingly thin as Spectres take the stage which is a shame as their no prisoners taken sound is exactly the sort of agenda that Ride were pushing artistically when they first started. There's a claustrophobic feel to much of what they do, particularly the tracks from this year's excellent Conditions album, propelled along by the drums through which dark riffs are often superseded by sharp momentary blasts of melody. Our friends aren't keen, which surprises us, but we find them intoxicating, exciting and challenging, refusing to water themselves down for this bigger stage they find themselves on. 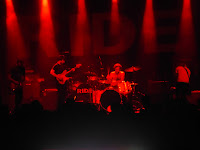 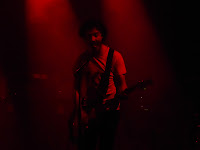 For a band that ended its first lifecycle with members of the band hardly being able to stand to be in the same room each other, there’s an immediate feeling of togetherness from the minute they walk out on stage tonight. For the first three quarters of the gig which are heavy on new material, it’s clear that the creative threads that had woven them so closely together on those landmark first three EPs and the Nowhere album that followed it have been bound back together.

The new material from Weather Diaries is imbued with a potent freshness that both harks right back to those halcyon days yet also sounds thoroughly modern as well. Charm Assault and future single Cali, with its trademark extended outro that Ride always excelled at, positively exude the joy of four friends back making music together and leave the likes of Like A Daydream and Seagull trailing in their wake. It’s rare, see also James and Inspiral Carpets, that a band reforming ever matches the heights that they scaled in their heyday, let alone surpass them, and these songs do just that.

There’s a massive amount of mutual love in the room as well. Andy dedicates Vapour Trail to The Stone Roses, but for a band that emerged at the time that this city there’s little in terms of natural lineage other than the moments when the wall of guitars drop to reveal delicate delicious melodies that stir the soul, especially on Taste. 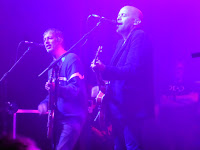 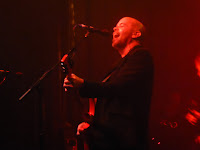 Mark and Andy share lead vocal responsibilities throughout, other than Rocket Silver Symphony where Loz makes his vocal debut to a rapturous response from the bouncing masses down the front. What this reminds us of is that Ride are far from just about that Gardener / Bell axis that gets so much focus. No great band, and Ride prove tonight that they are, functions without a rhythm section of this quality.

Inevitably they save their biggest hitters for last, although Dreams Burn Down gets beaten by the clock and doesn’t get played. Drive Blind takes us on a blistering ear-numbing journey that stops, starts, spins us round and does the same again, and Leave Them All Behind and Chelsea Girl, with everyone in the room singing back, have a similar delirious effect.

However, it’s the inclusion of a new song, White Sands, at the start of the encore that offers us the biggest pointer that this is going to be a more long-term reunion than simply cashing in on a few reissues and a contractual attempt at new music that so many bands fall into the trap of.

Ride are very much back and hungry to cement their place back in the hearts of the older members of the crowd and win over the youngsters amongst us who know of the reputation from parents. With a new album the equal of anything they’ve done before and the hunger to perform live very much in evidence, their impact is as compelling as it’s ever been.