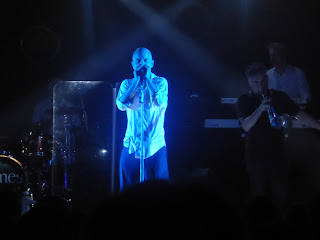 James played Leicester O2 Academy for the first time ever as a warm-up for their summer of festival headlines and, true to form, gave us a set of the weird and wonderful, the new and the old with the odd curveball and some, but not all, of their biggest hits as well as debuting two new songs Busted and Overdose.

They open with Walk Like You, the expansive seven minute opener of their last but one album La Petite Mort. Immediately, and James have a knack of doing this these days, they make you fall in love with them all over again and realise that they still are the best band in the world (in my eyes, you can choose to differ, but I don’t care). It’s a million miles away from the traditional “oh Sit Down” view of James as a band with one song, Walk Like You has about four within itself that slowly reveal themselves as the song progresses.

This is a band that’s (at least) as proud of their more recent work as they are anything they’ve done before and Dear John, from last year’s number 2 album Girl At The End Of The World, makes this point in the best way they know how, up there on a stage in front of an adoring but demanding fan base that love the band for this very reason.  They then go all the way back to their very beginnings for a wonderfully loose, ragged yet perfect Hymn From A Village. The song may be made up, but it’s anything but second rate or cosmetic music powder puff, it feels as rich, vibrant, awkward and as James as ever.

Part of that tradition they have is to take old songs that they’d felt had got into a rut of being predictable and reinventing them and How Was It For You?, absent as a set regular for a long time, gets that treatment. Unrecognisable until Tim starts to sing, it’s stripped back, toned down, teasing you that it’s going to explode into a wall of sound with its signature riff, but it doesn’t. And it’s brilliant. Say Something follows and eleven hundred people sing every word of this cathartic appeal whilst Tim skips over the barrier and comes amongst his band of disciples on walk about.

The two new songs – Busted and Overdose – follow, both are clearly works in progress as the band haven’t been in the studio to lay them down properly yet (Tim explained that process starts in September after a summer of tweaking and revealing them to these big crowds). What they do have is that centrifugal energy that the best James songs have when they’re played at this stage of their creation, dripping in the excitement of which route they’ll take and how they’ll develop and if they’ll make the final grade.

I Know What I’m Here For is next up, it’s electro-disco sound that ushered in the Millionaires era slightly muddied by a PA that’s a bit too loud for the room (and Saul, who looks like he’s having real problems with it). Born Of Frustration is majestic, Andy’s trumpet call rules the roost as it duels with Tim’s yodel (replicated by pretty much every one in the room) as the song sends everyone into ecstasy.

This is the point where 99.9% of bands on the planet would set phasers to stun and just run with a series of the best-known songs to the end of the show. This is where James are no ordinary band, they take things right down with a delicate fragile Feet Of Clay and follow it up with a tear-inducing Stripmining.  It’s a song that is in many ways their 1980s version of Moving On, Tim expressing the pain of loss in ways that connects and makes people feel that the song was written about them. Those of us old enough sigh and take a long deep breath.

She’s A Star is played in the stripped-down semi-acoustic form that was so well received last year and loses none of its potency, yet feels more appropriately poignant. Again it’s one of those songs that are most associated with the band, but it feels reinvented and almost a different song from its straight recorded version. Of Monsters And Heroes And Men, the penultimate track on 2008’s comeback Hey Ma, gets a welcome return – like Walk Like You, it’s one of those journey songs with enough ideas in it for another lesser band’s career, yet they’re all glued together loosely but with a bond that’s strong and unbreakable.

Moving On, Laid and Getting Away With It (All Messed Up) follow and the whole room is turned into one very hot and sweaty heaving mass of bodies letting go and losing themselves in the power of the music and the connection whilst Tim loses himself in his own world of dance when the songs hit the breakdowns and the band take them off piste.  They finish the main set with a glorious brooding Attention, perhaps the standout track on Girl At The End Of The World, and one which stands proudly at the end of the set daring the big hits to try and move it. It starts off slow, stops and then explodes into something that almost goes beyond music and takes you off into a world of the creative minds behind this song. It’s the James that their critics seem oblivious too, because to acknowledge it would mean giving them the credit that their approach deserves.

The encore starts with Come Home and we’re taken to a weird afterworld, turning back the clock to Manchester’s summer of love. Yet whilst so many of the dance-influenced tracks of that era have aged really really badly, Come Home hasn’t because it’s not allowed to rest on its not insubstantial laurels and is twisted, turned and made relevant to today.  Sometimes stubbornly refuses to allow itself to be moved from the encore and the band have ensured that, although you know the crowd are going to take it off them and make it their own at the end, you never quite get the same experience from one night to the next. For a James virgin, it much feel like hitting that orgasm point for the very first time after an evening of tantalising foreplay.

The final kiss off is Nothing But Love, the main single from Girl, and as the band join together to sing it, you sense that whilst they’re not getting any younger, age has made them even more aware of what they’re about, what makes them gel and what makes them so different and unique from all the other bands out there. James are predictably unpredictable and that’s what makes them so special.

James played Walk Like You, Dear John, Hymn From A Village, How Was It For You, Say Something, Busted, Overdose, I Know What I’m Here For, Born Of Frustration, Feet Of Clay, Stripmining, She’s A Star, Of Monsters And Heroes And Men, Moving On, Laid, Getting Away With It (All Messed Up), Attention, Come Home, Sometimes and Nothing But Love.