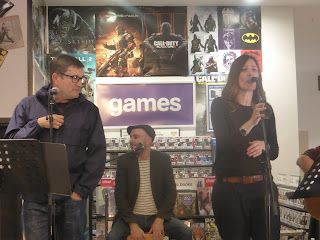 To celebrate the launch of their third album Crooked Calypso last Friday, currently sitting at number one in the midweek charts, Paul Heaton and Jacqui Abbott performed a six-song set, split equally between new songs and favourites from The Beautiful South, to a crowd crammed between the CD shelves at Manchester's HMV store.

The reuniting of Heaton and Abbott in 2013 for their first full album together in thirteen years was something of a masterstroke. It's an odd musical partnership on paper from the time Paul plucked Jacqui from obscurity to replace Brianna Corrigan in The Beautiful South, but one that has consistently delivered the best works of his impressive career. Two albums - What Have We Become and Wisdom, Lines And Laughter - as well as a selective raiding of Paul's back catalogue with and without Jacqui has brought them back into the public consciousness to the point that they can sell out a football stadium a month or so back.

This is a far more intimate environment, as Paul jokingly alludes to when telling us that he and Jacqui will pose for pictures afterwards given there's relatively few of us and we're all sober unlike at a gig, but one that really allows both the quality of the songs and the interaction of their voices to shine through. They start with a fabulous stripped-down version of Crooked Calypso's opening track and lead single I Praise, immediate proof that Paul's lost none of his rapier-like wit and observation and that his songwriting partnership with guitarist Jonny Lexus is still paying dividends. If I May is stripped right back to an acappella version complete with some dexterous harmonies from drummer Pete Marshall, whilst She Got The Garden is again a slightly tongue-in-cheek assessment of the sharing of the spoils of a break-up that makes real use of the two very differing vocal styles to great effect. 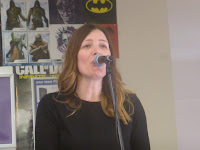 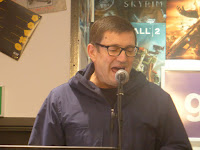 Paul's already revealed that the album is at number one in the midweeks, which if it held on would surprisingly be their first, and encourages us to buy it, then remembers that we had to buy it to get entry to the show, so suggests that we find Lana Del Rey and Ed Sheeran fans and divert them by handing out leaflets or steering them away from the store. Hopefully it won't come to that.

We're then treated to three old favourites from The Beautiful South catalogue. The intimate surroundings and the pared down sound set-up means that Rotterdam allows us to really appreciate the subtle intense beauty and range of Jacqui's voice whilst Paul finishes the song playing a mouth organ. Old Red Eyes Is Back gets a similar roar of approval, a song about the desperation of alcoholism that's got a bold bright streak of drunken optimism flowing through it that still rings true later despite it no longer feeling autobiographical. The set finishes with a fabulous funked-up Perfect Ten, a crowd favourite at their full live shows, which again with all the accompaniments stripped back brings the dark and light humour of the lyrics to the fore.

After the show Paul and Jacqui pose for photos, sign albums and anything else people bring with them and chew the fat with us. It's refreshing to see in this day and age artists who don't necessarily need to play the types of games needed to achieve chart positions and sell records coming to their fans and displaying such humility and engagement with them, yet you sense both of them thrive off it although you suspect Paul might not admit it while a beaming smile never leaves Jacqui's face as she waves at kids in the crowd during the songs. They may never be the coolest duo in town, but at the end of the day music isn't really ever about that. Let's hope they get their reward come Friday.