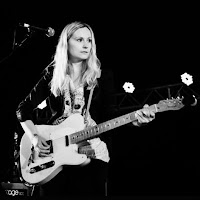 Anyone familiar with the blog will know of our love of Lanterns On The Lake. Their Live With Royal Northern Sinfonia walked away with our album of the year in 2016 and whilst the band are taking a year out to write and record new material, we were excited to discover that their front woman Hazel Wilde is playing a solo set supporting Mercury Rev at Gateshead Sage next Wednesday (12th July). We had a chat with her about that show, new Lanterns material and a possible solo album.

You're supporting Mercury Rev at The Sage performing solo. Are you excited / scared / both at performing on your own in such a large and stunning venue?

This will be the first time that I've played on my own so it'll be a completely new experience for me. I hadn't previously entertained the thought of playing  ​o​n my own until this came up.  ​

Playing in the band is obviously where I feel most comfortable but I think it's healthy to push yourself now and then. ​I guess there's no real pressure or expectation. I'm just treating it as a chance to play new songs to other people in the real world after keeping them to myself for some time - it will be good to let go of them in a way.

Your tweets have suggested that the set is likely to be new material. Is this for a solo record or the start of the next phase of Lanterns On The Lake?

Part of the reason that I said "yes" to this gig was that it would give me a kick in the pants to  ​   properly finish off  ​a whole bunch of songs that I had started writing but never got around to finishing off​. I'm the kind of person that needs a goal - I tend to ​get a bit lost without something that I'm working towards. So this gig has made sure that I have a​ focus.​

It's just a 30 minute support slot so I'll try to​ play a mixture of new material  ​(​that will potentially make up a solo record at some point)​ as well as a couple of new and old Lanterns songs that I think will work in that context.

How is the new material sounding? Is it a change of direction from what you've released previously with the band or a progression?

For this show I want the songs to be able to stand on their own at their most raw and simplest.  I​'ll  ​just ​play them on guitar or piano - I don't want to overdecorate or crowd them.

I'm not thinking too much about the direction at this point​, I'm just keen to keep writing and satisfying that desire​.​

You've announced a one-off show in Bristol in October with Lanterns On The Lake with brass and strings. Any thoughts as yet as to whether that will be career spanning or focus heavily on Beings?

Yes, we're looking forward to that​. The venue looks pretty special too. ​

We really wanted to take a break this year from playing live so we could do other things and also work on ​a new Lanterns record. I think this gig will give us a chance to ​shake off the cobwebs and ​connect with that side of the band without doing a tour. This show will most likely be a mixture of all three albums.

Of course you headlined The Sage yourself with Lanterns and released Live with Royal Northern Sinfonia. Are plans still on track for a physical release of that?

Yes. It will be out on vinyl in the Autumn.

Email ThisBlogThis!Share to TwitterShare to FacebookShare to Pinterest
Labels: Hazel Wilde, Lanterns On The Lake