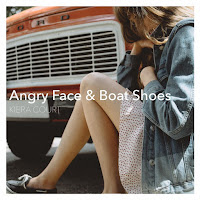 Kiera Court recently released her debut EP Angry Face & Boat Shoes, three songs that mark out the Essex singer-songwriter as one of the most promising and exciting emerging talents around.

Joanna is the EP's lead track, accompanied by a simple but hugely effective video. It's a song that places her in that radio-friendly zone between indie and pop and her expressive vocals and the deep rich harmonies that accompany them centre stage in front of a punchy repeated beat.

The second track Breath isn't as immediate but demonstrates further breadth to Kiera's vocal range, again over a musical backing that gives it room to breath and seduce the listener as she airily confesses "I'm losing my mind" as a form of mantra.

Kiera saves the best for last though. Hot Mess is a cleverly constructed piece of self-assessment picking over the bones of the confusion of young love - "my pants are on backwards, this is the effect when you say you have no answers for me, at least you're honest." The chorus is a real earworm, Kiera using the song's as an echo with the punchline "if you hadn't guessed."

Angry Face & Boat Shoes is an impressive calling card, three mightily strong and varied in their own right but signposting a blossoming talent who could head off in one or many different directions as her career takes off.