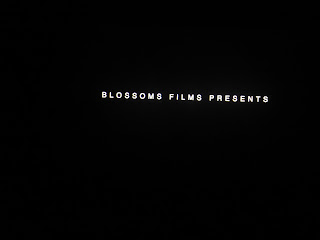 All Night Long is a self-made documentary of Blossoms' US tour from front man Tom Ogden. Filmed entirely with a hand-held camera, it documents the life of the five friends in the band on the road through North America in April and May of this year and offers a revealing and often hilarious insight into life on the road. Before the film's first ever public showing, they performed a five-song acoustic set in Heaton Moor's beautiful Savoy Cinema.

It's nine o'clock by the time Blossoms come on to stage, Tom chiding us in a whispered voice, for we're in a cinema, for taking too long to get to our seats and leaving them standing in the corridor waiting. It's a joke of course, but sets the scene for both the jovial nature of the acoustic set and the film itself. As he tunes, he jokes that there's plenty more of that going on in the film, before the five of them open with At Most A Kiss, with Joe and Myles with stripped down kit. They manage to turn the upbeat disco-influenced track into something quite different yet still true to the spirit of the original. Getaway doesn't need the same level of rework, but this slightly softer approach takes nothing away from the wistful hopeful romantic thought processes of the original. 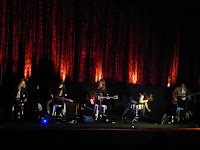 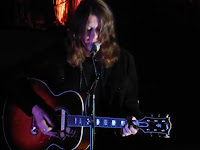 Before My Favourite Room, a man in the audience demands it's dedicated to his mate Shaun who's been dumped by someone called Ava, in what has become a tradition to find someone to sing the song for. "Get your phone out mate, your five minutes is here" laughs Tom as he starts the song solo before the rest of the band come in the middle eight and Tom and Charlie throw in a line of Echo And The Bunnymen for good measure, but don't add the medley at the end that's become a feature of their live shows.

There's a lot of demand for Honey Sweet from the younger and more vocal members of the audience and, testament to the enduring quality of the song, it loses little in translation. "I bet you can't guess for this one is" Tom laughs as jokers in the crowd shout out all sort of daft alternatives. He challenges Charlie to sing the Pearl And Dean cinema music before apologising to his mum for swearing and telling us there's lots of it in the film, mostly from Myles. They finish as you'd expect with Charlemagne. 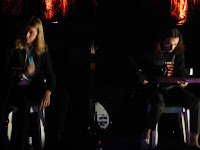 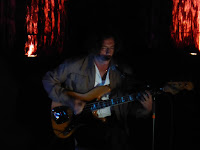 The hour and a half film All Night Long covers their two and a half week journey across North America in April and May calling in at Vancouver, Seattle, Portland, San Francisco, Coachella, Los Angeles, San Diego, Phoenix, New Mexico, Kansas, Milwaukee, Columbus, Buffalo, Burlington and New York, starting and finishing at Manchester Airport.

It's a completely home-made fly on the wall document of life on the road from life on the tour bus through their search for the perfect ragu in restaurants in the cities in which they stop off, Josh's worsening illness, encounters with some strange characters, Myles' now infamous improvised attempts at rapping and an afternoon in Kansas where they visit a shooting range via an Uber ride with a gun-loving taxi driver. There's very little actual Blossoms' music in the film itself other than a few acoustic versions of songs playing in the background and there's no concert footage at all.

From it you see the bond between the band and their crew that you need to survive such a gruelling time cooped up on a bus for long periods of times and the childish prankish humour and genuine love for each other that you need to get you through it. Whether it be them fixing a hoover, Joe being paid by Myles to make his bed, the discovery that you can buy Heinz beans in the US or the desperate attempt to hook a laptop up to the widescreen TV to watch an Oasis documentary, it's clear that the success that they've had in the last two years hasn't changed them, something evidenced by the fact this event is taking place in Heaton Moor and they're sat amongst us rather than some swanky industry-filled vacuum in London.

They're not afraid to take the piss out of themselves either, at one point, sadly not continued throughout, there's a "fuck count" in the corner of the screen and whilst Myles is often the butt of the joke, wittingly or unwittingly, it's done with a warmth and good nature that even an outsider looking in can see and one that only the very best of friends can get away with.

Whilst there's no story line as such, the events are captured and edited like a home video of life on the road. Those who travel round to multiple shows of a band on a tour as much for the craic and meeting people and discovering places will watch it and feel like it's the sort of document we could create of our own adventures. And by that measure, it's a resounding success.