Here's To Hope And Glory - A Festival Goer's Experience 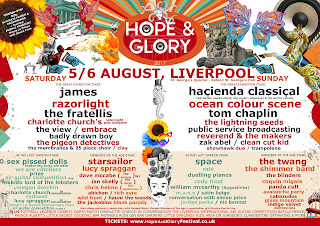 Saturday witnessed the opening day of the first Hope And Glory festival in the surroundings of Liverpool's St George's Hall. Billed as a family-friendly festival, the 12,000 capacity event turned into nothing of sort as social media became awash with horror stories of refused entry, limited security, appalling facilities, dangerous bottlenecks and other tales of woe.

Things didn't start off well. The 12 o'clock gates opening came and went as the queues snaked round the hall for further than the eye could see. No communication from the organisers was forthcoming about the delay, the reasons for it and potential time of anyone being let in. There was no one to ask either, the queue basically being left to manage itself other than at the very front. The stage times for the first bands came and went until the flow into the venue started at quarter to one.

Every gig goer now expects that additional security measures going into venues after events in Paris and Manchester. On having our tickets scanned, we were then ushered half way through one of the fenced off channels toward the venue and asked, not checked, what type of ticket we had to be given the appropriate wristband for day or weekend. Unscrupulous customers could simply have lied and would have been given a weekend band with a day ticket, raising the potential for issues on Sunday. Later, a friend with a day ticket simply was given a weekend wristband without the question being asked.

There were tales of staff not scanning every ticket and people being let in without checks, therefore raising the risk of duplicated entries and losing control of the number of people inside the venue and others of security guards simply letting people in at the bottom end of the gardens. 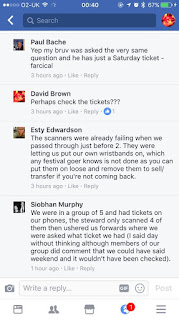 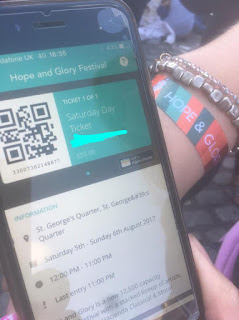 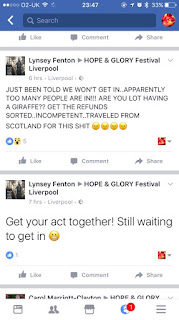 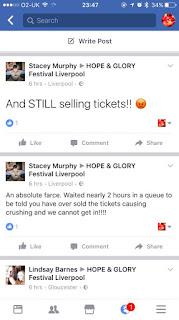 There was no searching other than if customers had a bag. Read that again. Last week in Newcastle we were subjected to hand held scanners, pat downs that bordered on the gynaecological and even having our wallets gone through. Here there was absolutely nothing. Seeing bottles strewn around the venue, and talking to people some simply went out whilst they could still get back in, because of the forty-five minute to an hour beer queues, and came back with bottles and cans. 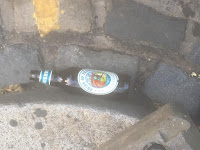 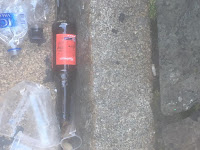 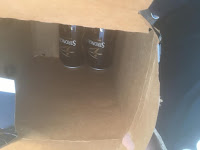 Once inside there was absolutely no information, until around 7pm, about how the timings of the event would now run or any sort of announcements other than the main stage compere trying to talk to us fighting with the stage's own PA and bleed from the other stages making him inaudible. The festival's social media, loud in the lead up to the festival, simply went quiet. The ejection of Charlotte Church from the bill, basically leaving her and her fans high and dry as the hour and a half delay on the main stage became two and a half hours, was announced simply by removing her name from the line-up on the screen. It would appear little rationale was given to her either for why she was taken off and others weren't. We have our thoughts on the matter, but as this article is sticking to facts, we won't include them.


The layout of the festival was completely unsuitable. We're not sure how many people were told that they wouldn't get in or how many left of their own volition, feeling unsafe in the situation, but it was immediately clear that the main stage area was not large enough to hold 12,000 people or anything close to that. It was surrounded on both sides by walls and fences that it would be impossible for large numbers of people to scale to escape in an emergency leaving the one exit to the left hand side of the stage the only way out at the front other than back through the entrance if the worst happened. Pictures taken whilst James were on seem to suggest that this area was full of VIP guests during the show. 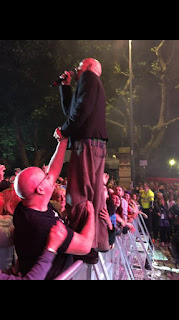 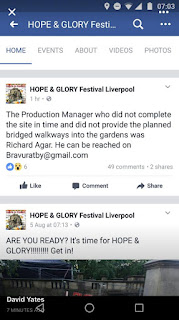 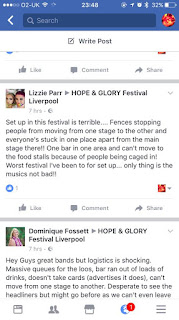 Back up at the top of the main stage area was the thoroughfare, if you can call it that, to the other two stages and the food areas. This compromised of two no more than twenty feet wide openings in the wall, one of which was fenced off and left that way other than when people tried to scale it to escape. Immediately behind this area were the toilets, about twenty cubicles (for a 12,000 crowd) and some un-signposted urinals behind it. The impact of this was simply that the toilet queues, in addition to the sheer volume of people movement, created a bottleneck that then became gridlock with people unable to move and with no venue staff there initially to help. Those urinals effectively became a mud bath later in the day as they quickly became full to capacity and effectively anything that went in, came out the bottom and on to the grass. 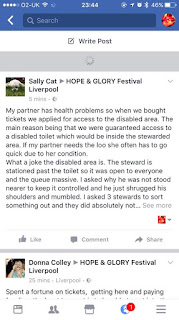 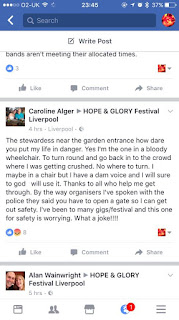 As more people tried to move around to use basic facilities and watch the bands they'd paid to see this situation deteriorated before the organisers, with the help of the police, actually did something about it. We witnessed a lady in a wheelchair being told that she couldn't go to the toilet because there was no way for them to move her safely. One of the few social media communications of the day, now deleted, was to blame someone else for work on some bridged walkways not being completed on time. If that had been the case, we would have expected extra staff presence at a location that could reasonably be expected to become a problem.

It didn't appear things were much better on and back stage even for the other acts that weren't removed from the bill. The Pigeon Detectives' lead singer asked the question if anyone knew how to tie down speakers, Embrace came on and went off because there was no sound, delaying things still further and The Membranes had their set cut short. Even though they'd finally announced new stage times for the final three acts, bands back stage were still being told differently and communicating this via social media. Those down the front, some of whom had been there from gates opening to secure a spot, complained of the lack of security and also no facility to give people water.

On the plus side, we do have to commend the majority of the staff we came across, many operating without any kind of information being provided and trying to make the best of the appalling situation they had been dealt with and doing so with as much humour and good nature as they could despite some fairly shocking abuse from a minority of the customers.

Hopefully the organisers will have learnt their lessons from Saturday's events to make Sunday a more pleasurable experience and that the council and police will insist on the enforcement of some basic control measures that could have alleviated and avoided many of these issues. The way they were dealt with though, the lack of communication and the fact that some of the issues are physical to the site layout does not leave us too optimistic.