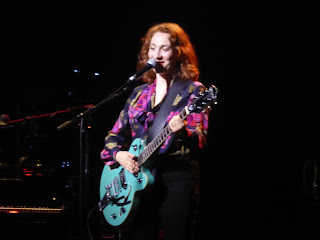 Regina Spektor charmed a packed Liverpool Empire on Monday night with a career-spanning set of songs that demonstrated the eclectic range of both her songs and her voice and confirmed her reputation as one of the most intense intimate performers of her generation.

Seated at the piano for large sections of the show, but also playing guitar, keyboards and singing a few songs without instruments, Regina's backed by a three piece band on drums, keyboards and cello which add haunting and dramatic effect to the huge twenty six song set that she performs over the course of two hours of a set packed with humorous and often random between songs anecdotes and a warming sense of gratitude that people come out to hear her play despite the success and acclaim she's enjoyed over the past decade or so.

Regina clearly has a lot of love for Liverpool, almost giddy with excitement at the fact she's playing on a stage where The Beatles had played, giggling like a schoolgirl when showing us "the most Beatle-y shoes I could find" before treating us to a cover of Where My Guitar Gently Weeps that she'd worked through with her band in the soundcheck especially for tonight and talking about knowing The Beatles songs before she could speak English and then learning them again once she could and about an earlier visit to the city's Bombed Out Church and the impact seeing the gravestones of young children had on her and the miracles of vaccination.

There's so much variation in style and delivery in Regina's set that it's impossible to not be transfixed throughout, the crowd silent in awe-like reverence other than for the between song "I love you Regina" or one gentleman calling out the chords of one song and joining in with clapping at a number of junctures at her bidding. Songs dance around themselves, as piano and cello dual for supremacy yet both end up submitting to that voice, particularly when it's used to such dramatic perfection on songs like the half-English, half-Russian Apres Moi or the gloriously laissez-faire Don't Leave Me (Ne Me Quitte Pas). 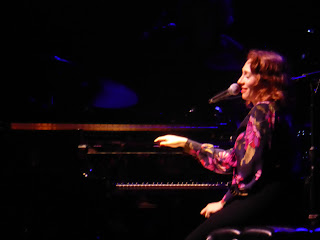 The set covers most periods of her career, most naturally pulling in eight songs from last year's Remember Us To Life which forms the bulk of the early to middle part of the set, whilst the crescendo of the night focuses on the more loved-in periods of her career, with each song getting an increasingly shrill and excited reaction from people dotted around the theatre whose enthusiasm breaks out of the sterile atmosphere seated venues can create. Begin To Hope and Us, with five songs each, form the build to the end of the set and get the most enthusiastic cheers of recognition, but the new material more than stands its own ground as you'd expect from a songwriter who's shown throughout her career an impressive and meticulous consistency of quality and impact.

She finishes with Samson, a song that goes back to her very earliest days when she was often dismissed for the awkward quirkiness of both the arrangements and the lyrics. It's interesting to note though that she hasn't sacrificed that even on the newest material, but has just toned down some of the lyrical contents and the key changes and the direction of the songs aren't quite as violently volatile as they were back then.

Regina Spektor is a unique songwriter, singer and character; an exciting but relatable alternative to the mainstream and it's that from which she garners much of her appeal. So much of tonight feels effortless, without ever feeling like she's going through the motions, but all that does is serve to accentuate the mood swings, the quivering uncertainties that run through much of her work and the beaming smile that appears across her face at the end of every song.