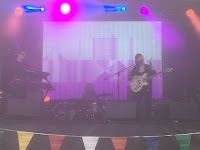 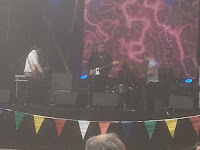 Following the cancellation of Hope And Glory Festival, we headed down to Derby Square in the city where the wonderful free event Liverpool Loves was taking place. Before the weather took hold and we went for shelter we witnessed two contrasting but equally brilliant sets from local acts The Protagonists and Natalie McCool.

The Protagonists probably think they're the best band in the world. They're not of course, but they have that cocksure swaggering arrogance that any rock and roll band worth their salt have in abundance and in Connor Day they've got a front man who believes his own publicity and delivers songs with a voice that's made for huge anthemic choruses being belted out in big halls.

They've got the tunes to back it up as well, as "purveyors of scouse poetry" their songs tell of growing up or not growing up in their home city. Recent single Mathew St might be dedicated to a place a stone's throw away but reaches out much further, whilst Tell Me, Alone and Blue Light are equally impressive.

Next up is Natalie McCool accompanied by drums and keyboard to make a sound much louder and forceful than some of the more intense intimate shows we've seen her play and it's needed to combat the rain that's started to fall. Her set features songs from last year's excellent underappreciated second album The Great Unknown.

With this fuller band sound the likes of Pins and Oh Danger brim with a vigour, an anger and a purposefulness that sheds new light on them from her solo shows and demonstrates the innate quality of Natalie's songwriting. The band also free her from the constraint of being the sole focus and liberates a side to her we hadn't seen before as a confident strutting frontwoman. Our friends who'd never heard of her before are mightily impressed.

Email ThisBlogThis!Share to TwitterShare to FacebookShare to Pinterest
Labels: Natalie McCool, The Protagonists