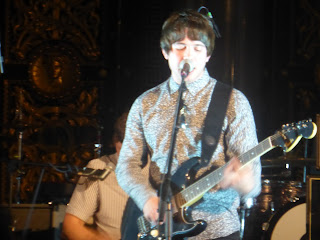 Vida opened Hope And Glory's "secret" Friday night gig in the resplendent surroundings of Liverpool's St George's Hall. Despite being beset by technical problems and suffering with the hall's natural echo, they make a strong impression on a growing crowd with a half hour set full of the sort of songs that have seen their reputation burgeon during the festival season.

Even since we last saw them a few months ago, there's a noticeable change in Vida tonight. They're far more confident, sure of themselves and with good reason. We doubt many of the assembled crowd have heard of them before by the muted response to them appearing on stage after the first of many delays that were to become one of the defining features of the festival, but that's soon blown away as the Alloa five piece launch into a set that has won the crowd over by the time they're a few songs in.

Their recent single Where We Came From and the equally impressive Fadeaway and a new song that we noted as A Place You'll Never Forget show just why they're making such headway so early in their career. They deal in the big soaring anthems that you can't ignore, unsubtle in their approach, but with a undeniable power and quality that you find yourself falling for. Jamie's vocals, the hall's issues aside, are made for big stages like this and they project an assurance bordering on the right side of a hint of arrogance that runs through the whole of the five piece's set. Guitar solos don't hold back with their belligerent swagger.

By the end of the night Vida have made a whole set of new fans and friends.

Email ThisBlogThis!Share to TwitterShare to FacebookShare to Pinterest
Labels: Vida