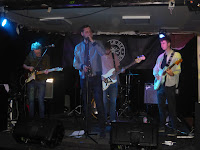 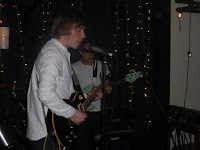 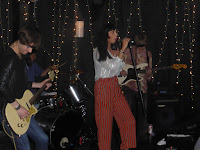 War Of The Outer Spheres was a multi-venue festival across The Peer Hat and Aatma in Manchester's Northern Quarter. Double-bookings led to a chaotic evening that merely added to the fun of watching bands and not knowing who they were. We caught The Maitlands, The Jungfraus and RedRooms amidst that madness.

The first band we catch are RedRooms, not that we find that out until later because they neglect to mention it, but that just adds to the mystique and mystery that draws us closer to watch them. Led by the enigmatic Natalie Cooper, who oozes so much cool that it makes the rest of the room feel uncomfortable in her presence and possesses a voice that emphasizes the drama in the words she's singing, their songs are full of dreamy ambition and a warmth that draws people in and has them wondering who the hell they are. They're great and we want to hear more.

Next up are The Jungfraus, slimmed down but losing none of the downtrodden yet psychedelic feel of their last album Kraak. Front man Mick Kenyon is as uniquely charismatic as ever.  There's a song called Steven Put Down The Screwdriver that's a bit bonkers and one about Henry The Ape that's equally strange, but when they're attached to tunes that wean their way into your affections the way these do, then they're on the right track.

We make it upstairs where The Maitlands are due to play, but we stumble across the last rites of a heavy metal night, so there's a delay before the five-piece finally make their bow about an hour later than planned. Led from the front by their now shitfaced frontman Carl, a Maitlands gig is always a unique experience. They've got a new drummer who almost didn't make the gig and leaves the band at the end of it, but this is the sort of thing that has become de rigeur for them.

Their songs, of course, have the same weird wonky brilliance as ever, whether Carl's barking out the lyrics or displaying an unexpected warmth and depth of feeling to them. The band provide the spindly, sparkly canvas for him, all jagged riffs but with melodies underpinning them that mean you can't dismiss them as mere chancers. The Maitlands might never be the coolest band in town, but behind the facade, they're one of the most honest, direct and strangely engaging.

Email ThisBlogThis!Share to TwitterShare to FacebookShare to Pinterest
Labels: RedRooms, The Jungfraus, The Maitlands