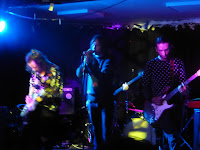 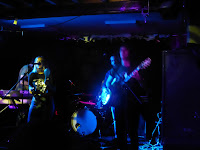 The twenty-sixth instalment of Astral Elevator’s psyche nights saw the return of prodigal sons Purple Heart Parade and a headline slot from Spain’s My Expansive Awareness in support of their new album Going Nowhere.

Purple Heart Parade have been absent from the Manchester scene for a while as they’ve been recording new material and playing shows in London whilst bedding in a new line-up. It’s an exciting time them with opportunities opening up for them and it’s a substantial crowd that have gathered in Aatma for a low-key support slot.

Even though they’re hampered by difficult sound issues throughout, they manage to reveal four new songs (to us at least) as well as old favourites Starfucker Blues and The Room. Whilst their personnel may have change, their meticulous approach to creating a huge hazy wall of sound for front man Pete to climb which he does in his own unique breathless way, either out amongst us on the floor or in a world of his own up on stage.

Of the new songs, the opener Pepsi-Cola Addict and Lonestar are the two stand outs, but they all demonstrate a band moving on a forward trajectory, staying true to what has given them the attentive loyal fan base that love them, but not afraid to progress their sound en route. The future looks extremely positive for them.

My Expansive Awareness, on their second night of a short UK tour, start their set with a long fluid instrumental that’s propelled along by a driving groove that gets those that have remained dancing along as there’s an infectious energy to those grooves that they create that perfectly taps into the modus operandi of Astral Elevator.

It’s not all instrumentals though as they work through songs from their recent album Going Nowhere as well as a Castaways cover mid-set with and Jose and Lucia sharing lead vocals, allowing the set to build in momentum throughout. It’s a clever trick, if intentional, as it holds the audience’s attention ever tighter as the set progresses. By the time they’ve finished, they’ve transformed an impassive curious audience into one that’s baying for more which is no mean feat for a Manchester Wednesday night.