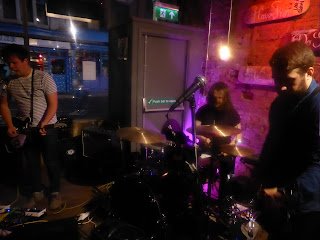 Ist Ist made the trip across the Pennines on Friday night for their first ever show in Leeds as they prepare for their biggest shows to date headlining the second stage at Ramsbottom Festival in September and Manchester Gorilla in October as well as their debut London show next month. In an intimate bar venue set by a window where passers by peered curiously in, they delivered a set that still packed the punch and raw power that's helped them make their name.

Ist Ist are the type of band that thrive in a big dark room where they can crank everything up, blind you with lights and strobes and make your heart pound in time with the bass. With the best will in the world, Milo strips them of all that, playing with a street window behind them by the door and next to the bar and sound split between amps and speakers, but that doesn't faze them and what we get is a unique show where all that aggression is channeled into a performance that feels like a very strange public rehearsal. 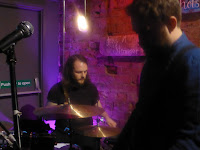 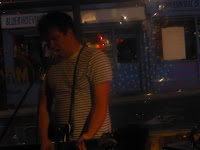 They open up with Things Will Never Be The Same, with its pummeling drum beat, raw rabid bass which allow Adam to let loose with the guitar whilst repeating the song's title throughout at varying levels of ferocity. The assembled crowd don't quite know what to make of it as its confrontational nature is far removed from what passes as indie fayre these days. A girl walks in just as Adam lets loose with one particularly piercing scream and retreats back upstairs until it's safe to come down.

Technical issues seem to plague Joel on drums throughout, but it doesn't come across in their sound. Ghost feels even more claustrophobic than ever in these strange surroundings, backing the audience into a corner whilst last year's single Silence nods its head to lost souls, but builds to a glorious final chorus crescendo before crashing to an abrupt halt and Emily is big, bold and swaggering, fit for the bigger stages and the audiences Ist Ist should be playing to if the industry wasn't so fixated on pretty boys and flimsy tunes.

They're in playful mood (for them) between songs, joking about the drum issues which get fixed by propping a bag against the kit and lobbing cans at each other. Whilst the set up at Milo can be described as basic, it does to its credit sound a whole lot better than many venues we've been in, and that allows the separation between the three instruments and gives the more skeletal moments of the songs that give Ist Ist their dramatic effect the space to exist. Thus 7's sparse experimental structures, that could get horribly messy with an inadequate set-up, sound as oblique and punishing as they're intended.

Strangers and Night's Arm go back to the more immediately accessible side of what Ist Ist do, the sort of songs that will blow unsuspecting people away in the tent at Ramsbottom on the Saturday night, the sort that genuine music lovers will listen to and immediately connect with and which in another time and place would have them being hailed as the saviours of rock music. They'd probably cringe at that notion though, once bitten many times shy as they are of taking the obvious routes with their music. As if to prove that point, their final song Diversion, a wild stuttering juddering cacophony that moves through many different phases, stops at one point when the audience applause thinking it's done, before Adam ends the song in the middle of the bar, lost in a world of his own.

It's Ist Ist down to a tee. And that's why we love them and think you should too.