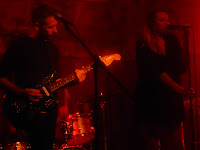 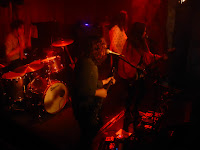 The Duke Spirit's new album Sky Is Mine is released on Friday and this Deaf Institute show, along with a London show, is an intimate preview designed to showcase new songs, of which we get four tonight. Support came from Brighton's Clever Things.

Clever Things feel like a modernised throwback to the halcyon days of rock and roll. They wear the influences proud on their sleeves without ever apeing them. Their approach takes no prisoners, sultry, swaggering and determined to take the growing crowd along with them on the ride.

Led by Daisy Coburn, a vocalist with a set of lungs, swaying hair and a demeanour that stops you in your tracks, they hit us hard from the start and there's little let up in their eight song set of sonically confrontational and visually striking rock outs, of which Hot Ticket and Slime just about manage to stand out in an impressive collection. 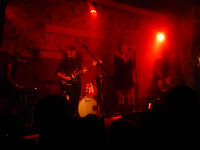 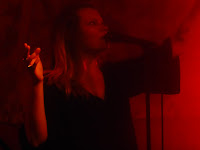 "I hope this is a small human punk rocker, thanks for being the first audience to vibrate with it" says Liela, proudly clutching the bump on her stomach. This switches the intensity of her performance from the wild physical movements to something more controlled. Her voice takes on a greater role in delivering the ferocious intensity we've come to expect from them in the fourteen years since their debut Roll, Spirit, Roll EP. Fortunately Liela possesses the sort of powerful one that could demolish walls by sheer weight of the emotion it contains and build them back in the slowed down more intimate moments such as Wounded Wing. With them now playing live as a six-piece with keys and sax, there's far more possibilities for them to play with.

The new material is as strong as anything they've done before. How Could How Come and Houses confirm the positive impression of lead tracks Magenta and In Breath. They may not have their foot on the accelerator pedal as firmly as in the past, but the warmth and intensity still shines through like a beacon.

As their set moves from last year's Kin album right back to three tracks - Hello To The Floor, the ever-expansive Red Weather and the set-closing Love Is An Unfamiliar Name, you can't help but note there's a continuity of purpose and direction running through even though the band have developed and progressed from the raw thunderball of energy and hair that made them one of the most incendiary and thrilling live bands over a decade ago. Today they're every bit as important, as vital and possessed as they were back then.