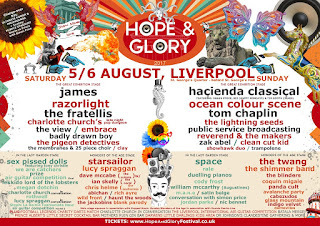 As the dust settles on the fiasco that was the Hope And Glory Festival in Liverpool at the weekend (our view of Saturday's events can be found here) and customers seek redress for the cancellation of Sunday's events for which they had paid their hard-earned money, there are a number of major health and safety concerns that need addressing.

The leader of Liverpool Council, Joe Anderson, has promised an investigation in the events on Saturday and before relating to the festival. A lot of the finger of blame has been pointed at the organisers of the festival, especially Lee O'Hanlon, but the buck cannot stop just there for health and safety issues. A site of this size cannot be simply handed over to a festival and no controls be in place to address the safety of the people of Liverpool and visitors to the city and the investigation cannot be allowed to whitewash anyone's responsiblities, whether they be legal or moral, for the safety of people attending the festival.

It is only with the actions of some of the stewards on duty at the event, the forbearance of the vast majority of the crowd and a lot of good luck that the event didn't turn from a fiasco to a major incident or worse where we would be talking about far more serious consequences.

As an attendee at the event, and many others of similar size over the years, there are a series of questions that I believe have to be addressed with full openness and disclosure by all involved in order to ensure that people, including families, are not placed in a situation like this again where they are at significant risk.

These 25 questions are not meant to be exhaustive, point fingers at individuals or organisations, but for lessons to be learnt and avoided in future, they need to be answered.

1 The organisers claim that the agreed capacity with LCCC for the event was 15k, which they voluntarily reduced to 12.5k. The headline act, James, were due to perform after the other stages had finished for the evening therefore there would be a reasonable expectation that the audience would congregate in an area less than half the size of the gardens. Was this considered in the granting of capacity and if not, why not?


2 That area was fenced in on two sides by walls and on a third side by the stage, leaving the only significant exit route in an emergency at the back of the venue where people came in. Was this an agreed lay out and who was it approved by?

3 If there was a deviation from the agreed plan, what controls were in place to address it?

4 What emergency exit signposting was in place?

5 What reviews took place, and by whom, ahead of doors opening to ensure that these were adequate?

6 What was the emergency evacuation plan in the event of an incident and had this been tested and briefed to the stewards?

7 What was the plan to allow emergency services access to the area in front of the stage in the case of an incident?

8 What sign off of the venue was there by the authorities before it was allowed to open and by whom?

9 What plans were in place for crowd control outside the venue, particularly queuing on public streets?

10 What was the communication plan and execution of it regarding delays to the opening of the festival and later when the entrance was temporarily closed?

11 Who determined that no body searching was to take place when customers entered the venue?

12 Were body searches part of the agreed security plan and if not why was it deemed to be ok given that this is now common at all major events?

13 If this was part of the agreed plan, why was the fact it was not happening identified and rectified once doors were open?

14 What controls were in place to ensure that customers were given the right wristband - day or weekend - on entering the venue?

15 At the recent shows at Castlefield Bowl in Manchester there were armed police inside the venue. What level of police presence was determined appropriate for this size of event and who decided on this?

17 If there were alternative plans for a bridge to alleviate this bottleneck, as the organiser has stated, and these did not materialise, why was the one route deemed acceptable for a crowd of this size?

18 Why were the toilets positioned directly next to this gateway when this would increase congestion at a pinch point in crowd movement?

19 How many toilets were available and what ratios of toilets to customers was determined to be appropriate to prevent potential congestion on site?

20 How was the number, size and location of bars on site determined so as to minimise congestion in these areas?

21 Where on site were the first aid facilities and what steps were taken to determine that these were appropriate by the organiser and the authorities?

22 What signposting was in place for customers to be aware of where these were?

23 The festival was billed as family friendly. What provision was made for families with young children such as access with prams and push chairs and nappy changing facilities?

24 What plans and security were in place regarding access to and evacuation from the disabled viewing platform and toilet and other facility access for these customers?

25 Customers at the front of the main stage claim to have been told that there was no provision of drinking water. Was this the case and if so, why?