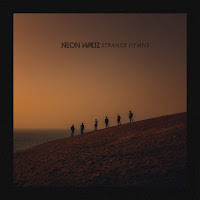 Neon Waltz's debut album Strange Hymns has been a long time coming, but has been more than worth the wait. The ten-song collection features a number of tracks they've used over the past three years to snare new fans and new ones that possess the same qualities of glorious abandon, fearless optimism and a love of timeless melodies.

Hailing from John O'Groats, Neon Waltz have been dismissed as some as being too eccentric, unwilling to pack their bags and move to Glasgow or London where they'd be closer to the heart of the industry. But that decision has served them well, able to develop at their own pace, free from the distractions and expectations of having to conform and shave off the rough edges.

That's the one theme that runs through Strange Hymns. Without ever being truly experimental Neon Waltz have created a record that sounds like no one else, both lyrically and musically, an outsider album that barges its way in and makes you listen to and then love it.

Song structures feel very traditional one minute and then turn volte face in the blink of an eye. The crisp unfussy production simply accentuates this throughout. For a six-piece band with unashamed psychedelic tendencies there's an awful lot of room in the songs, light and shade that allows the listener the space to dive in and immerse themselves.

Many of the songs here will be familiar to fans. Five - Sombre Fayre, Perfect Frame, Barewood Aisles, Sundial and Veiled Clock - featured on 2015's First Light demo and live compilation whilst Dreamers and Heavy Heartless have been released as singles and Bring Me To Light has been used to trail the album. It's a minor quibble though as these versions feel like they're pulling together those strands in one place.

From the moment opening of Sundial turns from a pre-apocalypse build into striking unfettered chiming guitars and the reassurance of the line "the time to rest has come, always on the run so slow down" kicks in, the tone is set. Dreamers, with its "you should do what you should do while you can" chorus followed by the "sha la la" refrain feels so simple and effortless but hides hidden depths below the surface. Perfect Frame, with drums crashing into the chorus to delirious effect, has a similar impact.

Bare Wood Aisles continues this theme; these songs throughout Strange Hymns, possess a magical ability to disarm, charm and join together to warm and disarm the listener. If songs could smile, these would have an infectious persistent grin. It's carefree too, You And Me declaring defiantly "this is all that we want, all that we need" after musing "you say fuck them, that's just what they say" whilst Sombre Fayre lives up to its billing without bringing down the mood too far.

Bring Me To Light is driven along by its own momentum and a guitar hook that feels instantly familiar but equally unplaceable, set as it is in a dream world of "staring into space, something on your mind" as drums once again dictate the song's route through the verse to the chorus. Heavy Heartless brings down the pace a little, building slowly but without ever compromising the mood of the record despite the declaration "nothing is OK, I'm going through a phase."

Folklore is perhaps the finest moment on the album, where the warmth in the vocals and the guitars uplifts the listener and reassures that everything will be alright as Jordan declares "I was an outsider, you will survive." Strange Hymns concludes with the glory of Veiled Clock, which like so much before it resists the urge to try and blow the listener away but instead relies on seductive understatement to win the listener's attention and affection.

The real beauty of Strange Hymns lies therein, the refusal to throw the kitchen sink at these songs, an easy option for a six-piece of this talent, but instead to use charm, melodies, an insistent unwavering whispering to do its bidding. It's a brave record in an environment that demands "bangers", repeating a formula over again in ever decreasing circles of audience attention spans, but it's a success on every level, more than worth what seemed like the endless wait that's coming to an end.