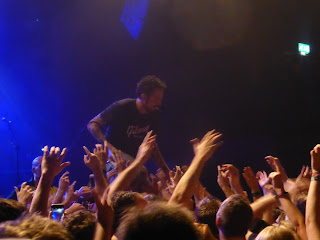 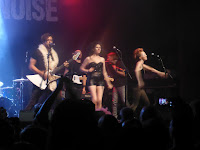 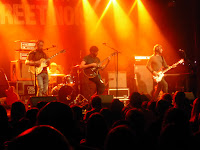 Gig 2088 for Frank Turner was a sold-out fundraiser at Manchester's Ritz for Big Issue North's Street Noise project. A more intimate show than Frank's used to playing in the UK was played mostly acoustically other than a guest-filled encore and covered most periods of Frank's career under his own name. Support came from Felix Hogan And The Family and Our Fold.


Bolton's Our Fold open up proceedings and they meet the challenge of filling this cavernous space head on. Plenty of bands who sound great in smaller venues often stumble when stepping up but Our Fold positively blossom and sound and look like they've been playing venues of this size all their lives. Last year's single She Goes On and their closing track Passing Over and its extended instrumental outro when they lose themselves completely in their art both feel like they were written for big stages and Damien and the rest of them deliver them with the confidence and assuredness that makes you share their belief that this is their destiny.

With other tracks like Two Little Angels and Terrific, it feels like the interminable wait for the debut album will finally be worth the years it's taken to get it just right and survive the industry's machinations. The response they get at the end from a partisan Frank Turner crowd that tend to know their stuff tells its own story. 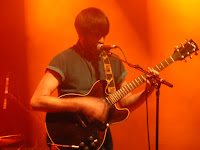 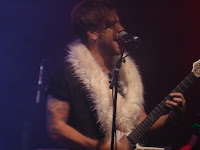 After a set of Manchester classics being spun by Clint Boon, Felix Hagan And The Family take to the stage. We knew nothing about them before they came on, although as they supported Frank last year they're familiar to a large part of the crowd, but by the end they've completely won everyone over. There's no messing around, no anguished moments of self-reflection, they let loose from the start, Felix throwing all sorts of rock star poses whilst Tash and Ellie take the lead at points, but get people going with an energetic performance that encourages audience interaction and participation. As the set progresses the crowd get more and more into it until the end when everyone is bouncing along with them, clapping hands and singing the words to their final song Kiss The Misfits whilst Felix comes down to the barrier to greet the heaving front rows. 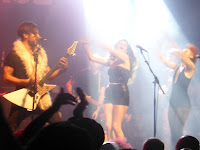 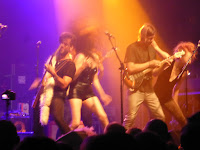 New single Hey I Want You sees Tash share lead vocals when she's not prowling the stage with Ellie, gesturing at the rest of the band so they get the acclaim they deserve for some impressive guitar work in the breakdowns. It's a set full of great songs like Go Back Home and My Lords And Ladies that make them a perfect festival band because they're fun, have tunes that aren't difficult to fall for and don't need to try too hard to make you do so and because they have an energy that you think must drop at some point in the set but never does. It's exhausting just watching them posing, pouting and leaping around and whilst we should probably hate the showmanship if we're wearing our cool shades lens, we can't help but love them.

Frank Turner has a similar issue, not that it probably concerns him one iota. For some reason he's accused of selling out the punk scene he was once part of by musicians who would kill for a fraction of the response he gets tonight. The crowd leave the venue singing an impromptu version of The Ballad Of Me And My Friends and the only surprise is that they've still got any voice left after Frank's hour and a half set of songs covering most bases of his solo career where he's often at risk of being drowned out.

He opens with a new song Be More Kind from the next album he's been writing and recording. In our recent interview he talked of a different direction and like The Sand In The Gears, a song he posted on youtube earlier this year, it feels like he's taking a more political direction, but rather than focusing on rhetoric, he puts a human slant on it that means people can relate to it rather than it disappear into sloganeering. You can almost hear a pin drop during the song after the deafening welcome he gets when he comes on to stage. It's a celebratory atmosphere throughout the show, despite it being a solo show rather than a full on rock gig. When he plays Next Storm, he stops after the first chorus to commend us on not singing the backing vocals as they're only on the last chorus but people normally sing them throughout which he tells us is wrong. By the time we get to it, the singing of "Rejoice" is at a level that we can hardly hear him above us and the grin that cracks across his face hardly leaves it until the end. 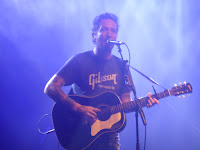 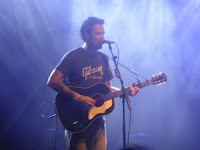 There's a message to the evening as well as this event is for Big Issue North's Street Noise project. Frank stops in the middle of Photosynthesis to remind us why we're here and why we should not just contribute to the collections here but think about homelessness and get active to help solve one of the biggest blights on our society. He also references the arena bombing and the city of Manchester's response when he played recently with Blink 182 at Castlefield and how "this shit beats the other shit" to the loudest cheer of the evening, quite appropriate given what happened with the Allah La's in Rotterdam the night before. He's also on good form as usual telling stories between the songs that give a personal touch, whether it be his gran Peggy's encounter with a Nazi in North Africa during the war where she ended kicking him in the balls or ending up reading all the Harry Potter books for his god-daughter Eva Mae, both people subjects of songs he plays. He tells us he's playing a few songs that were requested via email and that he might forget them if he hasn't played them for a while. But the atmosphere he creates he'd be forgiven something as minor as that. 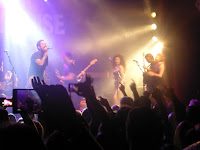 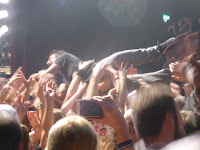 As the set progresses, Frank cranks up the volume and the pace of the songs finishing with a six song salvo that tests the audience's ability to sing along to its maximum. Mittens and Get Better from his last album Positive Songs For Negative People perhaps get the best response as fans link arms, a group in the middle of the floor who met after going solo to recent London shows get given a name check and kick off a moshpit and I Still Believe becomes a self-fulfilling prophesy as the power of rock and roll does save us and takes us away from whatever else is going on for the ninety minutes or so that Frank is on stage.

For the encore Frank comes back out accompanied by Felix Hagan And The Family and tells us that the Sleeping Souls are back at home rehearsing and relaxing ahead of a tour, but that Felix and his crew have learnt a couple of songs so we can rock out. They cover Queen's Don't Stop Me and Green Day's Basket Case to a delirious reaction before finishing with Frank's own Four Simple Words, during which he tries to crowd surf to the sound desk but fails because of the length of the microphone cable and then orders a circle so couples can waltz in it before the mosh pit starts again. As it finishes, the crowd take it upon themselves to start up The Ballad Of Me And My Friends as they leave. It's a fitting way to finish an evening with an artist who has a special bond and connection with his fan base.

Frank Turner played Be More Kind, The Way I Tend To Be, The Opening Act Of Spring, The Next Storm, To Absent Friends, I Am Disappeared, Peggy Sang The Blues, The Road, Photosynthesis, Song For Eva Mae, Journey Of The Magi, Polaroid Picture, Mittens, Long Live The Queen, Recovery, If Ever I Stray, Get Better and I Still Believe with an encore of Don't Stop Me Now, Basket Case and Four Simple Words

Email ThisBlogThis!Share to TwitterShare to FacebookShare to Pinterest
Labels: Felix Hagan And The Family, Frank Turner, Our Fold