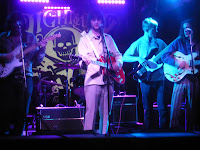 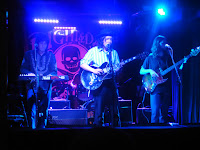 Tuesday night saw the latest of the Night And Day's new band showcases featuring headliners The Big Peach, still able to count the number of gigs they've done on one of their hands yet making a storming first impresssion, and Liverpool troubadours DUSST who delight the audience with their feet-tapping jazz / psyche tunes.

"This is a jazzy one, we forget the names of the songs" Joe tells us at the start of the second song, and that inadvertently sums up DUSST. They're a band that care less for the niceties of the show, rather everything is focused on their music and it shows in the way they fuse a whole variety of influences - blues, psyche, jazz and a hint of soul - into their songs which have grooves running through them that it's impossible not to fall for.

And fall for them is exactly what the Night And Day crowd do. They might not be down the front dancing and it may not be as packed as usual, but the response they get is louder than you'd get for a band with ten times the people in such is the high standard they set themselves from the off and maintain throughout. This is music that will appeal to anyone because it involuntarily has you hooked before you realise it as you think you hear something else in there, but by the time you do, DUSST have left you behind and moved on. As ever Happiness Is On The Horizon is a highlight, but their opening track, a new one, and the final song which talks of finding a way and a better day somehow are more than its equal.

The Big Peach are a new band and at points it shows tonight. They're still at the stage where parents and girlfriends make up the best part of their crowd, but there's nothing wrong with that in the early days of the band, but as soon as they start to unleash these songs to a wider audience, they'll be guaranteed to be picking up far more admirers. Still a little raw around the edges, front man Harry starts to sing the first song and realises he's come in too early as an example, they're brimming with promise and they're not short on confidence in their playing either and they'll develop a stronger stage presence as times comes.

For now though it's the potential that shines through. They've already got the makings of a strong set with eight originals and a cover of The Beatles' Back In The USSR which they put their own unique spin on and almost make their own, no mean feat with such an iconic song. It's their own songs that grab the attention, opening song and debut single Give Up Askin' is the tale of an infatuated boy being given the brush off by the subject of his attentions whilst Game We Play and How Can You Say already sound like potential singles even at this nascent stage in their career whilst Give Up Askin's b-side Politician isn't going to be happy with that label for ever. They even swap lead vocals for Free And Easy without impacting on the hugely positive impression they make.

They save the best till last though. It's Alright Mama is full of swaggering intent, doffing its cap to some very overt sixties influences, but then twisting and turning them on their head and creating something that feels very modern, vibrant and certain to have people salivating over them once they get to hear it. It's the best song we've heard from a new band in a long time.

It's been a while since we've been so taken by a band so early in their career, but The Big Peach are one we're going to keep a very close eye and ear on. We recommend you do too.

Email ThisBlogThis!Share to TwitterShare to FacebookShare to Pinterest
Labels: Dusst, The Big Peach