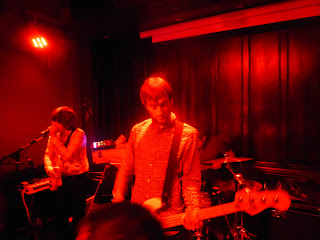 Back in March, The Lucid Dream were on a European tour when their van was broken into in Paris and all their equipment stolen. A Crowdfunder appeal raised over £10k to replace it and to say thank you, the band played two free gigs recently, the second of which was at The Castle Hotel in Manchester on Saturday night. As a special treat they revealed three new songs from their fourth album that they're in the process of recording.

There's a celebratory atmosphere in the eighty capacity room at the back of The Castle Hotel. Many of those in the room attended a gig back in 2013 that's gone down in Manchester psyche folklore and have stuck with the band as they've fought the good fight against the apathetic media support they've been given despite selling out bigger and bigger venues across town and adopting Manchester as their second home. A hot summer day means the temperature is close to boiling point too as the anticipation builds for the set.

As promised they play three new songs, opening with one of them called Alone In Fear, starting with Mark playing around with effects from his magic box of tricks located behind him on the cramped stage. Like the other two new songs, and their previous three albums whilst we're on the subject. It's something that pushes the needle and takes them into new territories that they haven't explored before. They do it at points within the same song, take the double blast of Nadir and Epitaph that finish the main set and clock in at around twenty minutes between them, but have more ideas embedded in them that most bands manage in a career. It's music that you have to indulge yourself in, dive right into and immerse yourself to really appreciate it, due to its diversity and complexity, but in this dark, sweaty room, that's exactly what people do.

The other two new songs - Breakdown and Zenith - appear mid-set and confirm that assertion that this is a band that is bursting at the seams with experimental mind-altering ideas that they set to music. It's too challenging, too different to allow itself to be playlisted, although supporters tried with 6 Music tried with Bad Texan and I'm A Star In My Own Right from last year's Compulsion Songs third album, and the fourth album sounds like it's going to take us all on a similarly weird and wonderful and rewarding sonic journey when it sees the light of day.

They're not a band to change their path intentionally though to get rich or famous. At points it feels like the four of them are playing their own show in their own world, but somehow there's a connection that means they instinctively know where the others are going and go with them. The love they inspire, evidenced by the incredible response to their theft in March and the room moving as one en masse at parts of the set tonight tell the story of a band that's got something that other bands would kill to even close to matching.