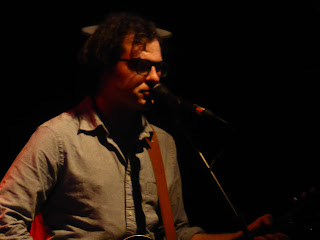 Ryley Walker returned to the wonderful Trades Club in Hebden Bridge as part of a short UK tour. Armed with a four-piece band to back him up including support act Bill MacKay he played an enthralling set including three new songs from his forthcoming fourth album as well as favourites from Primrose Green and Golden Sings That Have Been Sung.

Bill MacKay opens proceedings with an instrumental set that demands your attention, but doesn't get it from a few who prefer the sounds of their own voices as is often the case when the performer doesn't use words. That does Bill a massive disservice as his pieces are intricate in parts and in others demonstrate a mastery of the fretboard that you have to watch as well as listen to. It's not difficult to understand why he and Ryley have formed a strong working relationship - often eschewing tunes for a demonstration of guitar playing skill and technique that's fascinating at points. 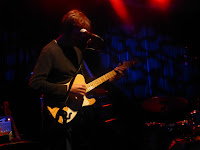 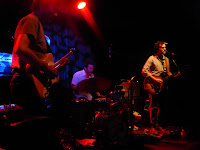 Bill is also in Ryley's band who make a typically low-key entrance. You never quite know who's going to turn up with him, this is the seventh time we've seen him and the seventh different line up. His approach to playing live is to tear up everything except the very base blueprint of his songs and to carve something else with his partners that has an unsettling intensity to it. It's not the sort of music, or live show, that you can drift in and out of.  He starts with Summer Dress and it's stretched to eight minutes long that feels like a journey through their creative minds with a mix of guitars, double bass, drums and keyboards. He laughs that we can now concentrate on the hits before muttering about telling his overdraft about his bank balance, but like so many great artists you suspect Ryley's talents will only be appreciated fully at some point in the future when he's no longer making music.

He follows this with two new songs, 22 Days and Opposite The Middle, both of which have the same revelatory confessional feel to them that most of his work does. He's a raconteur, honest and brutal in his self-assessment throughout and these songs are no exception, the former with a line about giving himself 22 Days to find a map. He's also a joker, responding to a compliment on his haircut by telling us he'd just put gel in his hair "like a fucking asshole" before complimenting them with a "good heckle" response and later tells a story of the five of them being in a queue in Marks and Spencers earlier in the day. He tells of his love of this part of the world compared to places like "Butthole, Indiana", fake yawns before the final new song So We Tried and introduces the audience to his friends from previous visits. His easy-going demeanour between songs breaks down any that the intensity of the performance and the requirement to immerse yourself fully in what they're doing might create. 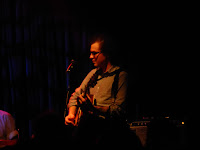 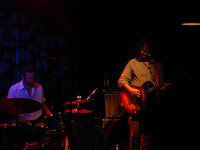 That could happen when Primrose Green clocks in at around eighteen minutes, the first ten being an instrumental journey that finally makes it way into what is recognisable from the recorded version, the five of them losing themselves in the music on the way. Halfwit In Me demonstrates a side that is more cognisant, intentionally or not, of the need to deliver a song that packs a much sharper focused and targeted punch, but which never feels like going through any sort of motion, either lyrically or musically. Funny Thing She Said might lack the rough polish of the recorded version, once it has also taken us on a seven minute wandering path before Ryley starts to sing but it explains the reason why the room is packed - it feels like the minute the first note of the song is struck that this is acting as some form of cathartic outpouring of a point of time or a piece of mind.

On The Banks Of The Old Kishwaukee is also proceeded by ten minutes of the five of them losing themselves in their own artistic chamber and presenting the output to us. It feels a bit odd, but not atypical of Ryley's approach, that Sullen Mind, which has a forty minute plus version on the second disc of Golden Sings, is one of the songs that doesn't get the stretched out treatment. They head off, but there's no way they're leaving just yet and give us a final serenade of Roundabout, spine-tingling in its impact, a world-worn, weary resignation in the voice that merely emphasises the pathos of the words - "I'd buy you a drink, but my credit is quite shit." It's probably the moment where he's come closest to ticking the boxes of those who make decisions in radio ivory towers without ever experiencing gigs like this. After an hour and fifty minutes and just ten songs and us checking how fast we have to run to get the last train back from this wonderful venue to Manchester, he bids his farewells.

Ryley Walker isn't for the faint hearted or if you're the kind of person who browses for one song by an artist then moves on. He's all or nothing, you've got to buckle up, take your place and go with him and trust him he's taking you down the right path.