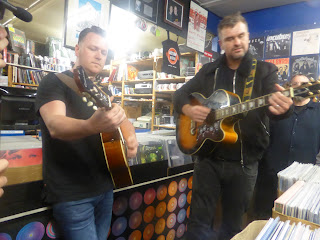 As part of a whistle stop tour of record shops to promote their new album The Death Of A King, currently sitting in the top ten midweek, Jon (Rev) and Ed from Reverend And The Makers rocked up to a packed Action Records in Preston for an early evening in-store and signing session. A ten-song set, mixing songs from the new record and their previous five top twenty albums, gave the crowd the opportunity to fall in love with the new songs, sing along to old favourites and then meet and greet with them afterwards.

Most in-stores are polished events, a stage set up, mics and a precision that wouldn't be amiss at gigs, yet Reverend And The Makers' week of visits to stores off the usual promotional circuit are, like his promotion, much more organic. Jon and Ed simply turn up in their car, walk in through the front door past us with their guitars, nip out the back for a fag and then play a ten-song set unamplified, making it fun by playing around with their songs and not being afraid to laugh at themselves as well as others between songs.

The set starts with two songs from The Death Of A King, the new single Monkey See Monkey Do and Black Cat. The songs are stripped right back as required by the set-up as is Auld Reekie Blues which Ed sings later, but what isn't lost is the immediacy and sing-along quality of the songs. It's something that works equally with the older songs where audience participation is greater due to familiarity, but what this demonstrates is that Reverend And The Makers are still bursting at the seams with ideas, and, as Jon tells us and they show us with Ed singing Auld Reekie Blues, they're not afraid to put them to the hardest test of all - with us, their audience.

The fact that there's two of them doesn't hinder them at all, whether it be Jon singing Laura's parts on Bandits or, more amusingly with facial impressions, on He Said He Loved Me, or urging us to sing along on Heavyweight Champion Of The World and impersonate instruments on the cover of A Message To You Rudy and the final trumpet call of Silence Is Talking.

Jon urges us to buy the album to keep it in the top ten and not be tight, and to help them keep The Script and Foo Fighters at bay. A top twenty album is a real success for a band that has little mainstream media support because they're not seen as cool and because they're not afraid to be unspoken, but what's clearly evident here is that they're a band of the people who can laugh and joke at themselves as well as with their fans. He says he doesn't like Heavyweight Champion Of The World because they've played it so many times, but he recognises the love people have for it and he doesn't want to do what Radiohead do and drop Creep.

By the end their decent honest Yorkshire charm, as well as the great songs and intimacy of the performance, has won everyone over. This is what music is at the end of the day, people coming together and a connection being made. There's no pretence of cool, no prerehearsed statements, just music stripped down to its core components and shared. The success of Reverend And The Makers is a success for those of us who think music is more than just a business or an industry.

Reverend And The Makers played Monkey See Monkey Do, Black Cat, Bandits, Auld Reekie Blues, A Message To You Rudy, Heavyweight Champion Of The World, Black Widow, Makin' Babies, He Said He Loved Me and Silence Is Talking.