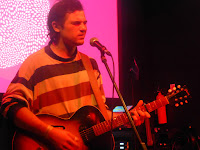 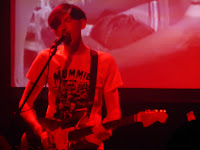 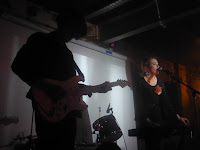 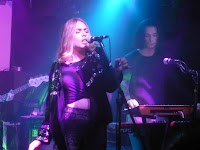 The third annual Manchester Psych Fest took over three Northern Quarter venues on Saturday with an eclectic range of acts that fall under the loose umbrella that is Psych these days. We spent the afternoon and early evening in the company of Freakout Honey, Britain, TVAM and Ryley Walker.

Manchester Psych Fest 2015 saw Freakout Honey play their first ever gig at the Night And Day. We're back there to see them open the 2017 version of it. This year's event feels like it could be a turning point. Seemingly ever-changing line-ups have ensued since then, but the five-piece in front of us today is hopefully one that they'll settle on and will be around for a long time. The five songs they play capture the essence of what this festival is about more than any of the other bands we see. Their music takes you on a journey, opening and closing their set with two glorious instrumentals, laden with keyboards and guitar riffs that get the feet tapping involuntarily and with three songs in the middle of the set that show off the not inconsiderable vocal talents of their new front woman Paris Taylor, who looks and sounds like she could walked in from a time warp from 1960s Haight-Ashbury, it feels like this could be a defining moment for them. 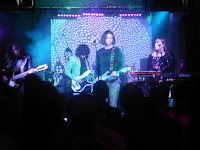 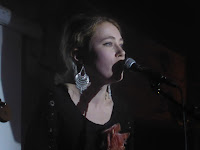 Next up is Preston duo Britain in the basement of Soup Kitchen. With Katie on keys and vocals and Joey on guitar, it's a minimalist set up they've got, but one that allows Katie's ethereal sounding voice to really shine through to its full haunting effect. This is delicate electronic music at its most subtle and enticing, only shattered by the occasional shard of piercing guitar from Joey. They quieten most of the noisy crew that have congregated by the bar such is the impact they have over the six songs they play.

It's then on to the festival's third venue Band On The Wall for TVAM and his box of tricks, both aural and visual. His lyrics flash up on the screen behind his head interspersed with seemingly random videos which also feature on TV set ups on the stage whilst he plays guitar. It's an intriguing mix and one that could quite easily become a one-trick pony over a longer set, but there's more than enough variety in the sound and the visual aspects to ensure that doesn't happen. 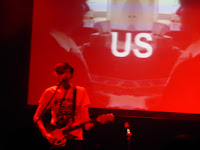 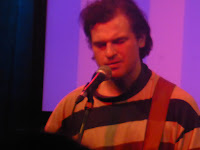 Ryley Walker is riding solo tonight as his European tour draws to a close. He's in no mood to curb his experimentation though as he starts with a seventeen minute version of Funny Thing She Said, the first three-quarters of which are instrumental, beset a little by feedback and also him knocking the pedal off at one point, joking "it's all part of the show." If anyone was expecting anything different, there's no dissent at all. Summer Dress and Primrose Green follow, the latter again with a mesmerising instrumental opening appended on to the front. Before it Ryley asks if Mark E Smith is here as he's put him on the guestlist and he engages with the audience throughout between songs, introducing one of his friends in the crowd whilst he tunes, thanking us for "putting up with some wooky arsed folk music in the middle of psychedelia" and joking about being "a tax-paying god damn American" when someone suggests he should stay in Manchester.

Those first three songs take close to thirty five minutes and are followed by an instrumental piece called The Grand Old Trout from his upcoming collaboration with Bill MacKay called SpiderBeetleBee. Roundabout, one of the radio tracks from his last album Golden Sings That Have Been Sung, is next and is in parts almost unrecognisable from the studio version that pricked the ears of radio stations here, but that's the magic in what Ryley does. He doesn't just play songs straight. add a bit in here and there, he reconstructs and reinvents them. He does a beautiful simple cover of Tim Hardin's If I Were A Carpenter as a contrast to what's gone before finishing with Halfwit In Me, a self-deprecating song that feels like a fitting finale. Ryley's one of the most unique performers around today, totally oblivious to the games you need to play in this game he's in. The only rule is to be yourself, and for that he has a growing army of fans that love him for just that.