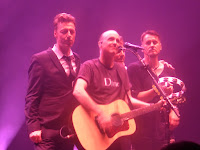 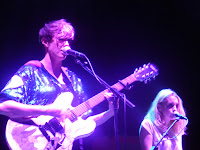 For two nights only Travis are revisiting the album that is most associated with them, their three million selling 1999 album The Man Who, with shows at Manchester's Bridgewater Hall and a headline slot at London's On Blackheath festival. Their Manchester show combined the album with a series of crowd pleasing favourites from the early part of their career, supported by the wonderful She Drew The Gun.

It's been intriguing to watch She Drew The Gun's development from Louisa playing solo shows to the  four-piece that now don't look or sound out of place on stages like this. Songs like Since You Were Not Mine, Poem, Where I End And You Begin, Pit Pony and the set-closing No Hole In My Head don't feel out of place in this reverential space, nor do they need to be overly embellished. The beauty of the delivery of these songs is in the very much understated musicianship from the rest of the band that really gives these songs the room to breath and consequentially even more gravitas. It also allows the listener to focus on Louisa's words, whether it be the two voices inside her of Where I End.., the most potent social commentary of Poem and Pit Pony that get an incredible response for a crowd waiting to relive their younger years whilst the feminist message of the cover of Melvina Richards' protest song No Hole In My Head might get lost on some, the potency of the song can't because of the way it's delivered. It's clear that fellow artists love She Drew The Gun, it's about the time the rest of us caught on. 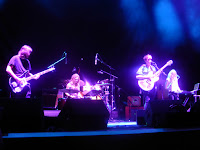 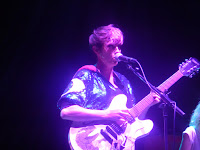 The classic album gig format is an interesting one. Observing around the room you notice people who only know the singles from the record, no more evident when the audience is up and down like a jack in a box because of the restrictions a seated venue places on us. You also see those in the front row who rather obtrusively think that the band is the backing to their latest selfie videos and one gentleman has got the idea that the band want to see photos of themselves performing whilst they're performing. That aside though, the overwhelming feeling is one of love for an album that bucked the trend for big anthemic statements from the likes of Oasis and the Manics or the art school posturing that Blur and Pulp had built success on by focusing on the simplicity of great songwriting and the ear for a chorus that you couldn't get out of your head even if you wanted to.

They play the album in full in its original running order, backing by Klaus on keyboards and a four piece string section for the songs that lend themselves to that treatment. Of course, it's the four big singles - Driftwood, Writing To Reach You, Why Does It Always Rain On Me and Turn - that get the most ecstatic response, no surprise there really, but it's actually the other songs off the record that evoke the most memories for us.

Quite often the classic album format of gigs can reveal a paucity in a band's output, a disconnect between the big singles and the rest of the record, but with The Man Who it demonstrates the unerring quality of their songwriting and the fact that they didn't always have to rely on a big singalong chorus to tug at the very hardest of heartstrings.  The likes of The Last Laugh Of The Laughter, As You Are and the delicate Luv show a much more tender side to the band than the singles would suggest. At the end of Luv, Fran recalls the story, in an impressive Burnage accent, of Liam Gallagher summoning him to his dressing room on the Be Here Now tour and demanding a song to which Fran played an acoustic version of it and had him in tears before declaring that he was "weird." 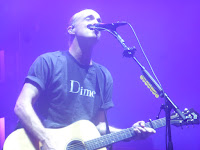 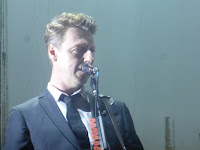 It's that sort of humourous anecdote that endears Fran to so many and tonight is no exception. The Last Laugh Of The Laughter is introduced as a "Jazz Singer moment", he and Dougie discuss the potential inappropriateness of a forty-four year old singing about U16 Girls before concluding it was probably dodgy at twenty three too and there's plenty of comments about Fran's kilt, particularly when he puts his life and crown jewels in the hands of others by venturing out into the crowd and standing on seats to play Where You Stand, the by far most recent song they air tonight. It's that connection though that makes Travis special, like when Dougie, Andy and Neil clink beers and water at the start of Slide Show in a "we've done it" moment, when Fran recalls She's So Strange was the first song they wrote together or as the four of them come to the front of the stage and completely unplugged managed to quell our urges to drown them out in the verses of Flowers In The Window, you feel these are moments that mean as much to them as those whose arms aloft and spread wide, eyes closed reliving the most important memories that this record generated. 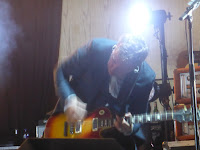 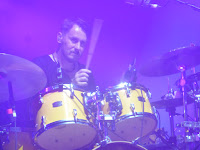 Whilst Dougie's ice cool persona, dressed as if he's returning from a funeral, contrasts with Andy's lost in his own world guitar style, Fran never stops moving, whether it be around the stage or leaping off Neil's drum riser. Even if you're still not convinced by the music, you can't help but warm to the enthusiasm they've still got and the togetherness that you feel that dismisses any notion of cash-in with this classic album gig.

The second half of the set is a mini-greatest hits in all but name, despite Fran's assertion that these are songs they don't play often. Side, Coming Around, Closer, Flowers In The Window, Reoffender and Sing cemented their name and songs in the hearts of millions and tonight they have that same effect. They also prove they can let loose too, The Man Who's hidden track Blue Flashing Lights plus the debut album's title track Good Feeling and U16 Girls show a side of the band that their critics would ignore. 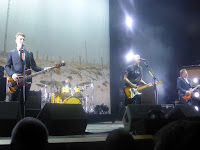 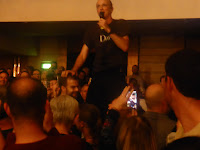 Travis might never be seen as the coolest band of the Britpop generation because they didn't buy in to the look at me mindset of many of the key players in the scene, but they didn't need to because they let their music do their bidding for them. It's why The Man Who?, eighteen years on, doesn't feel dated and extracts the same deep emotional connections and reactions it did back then, if you, the listener, let down your cool guard and let it in. It'd be a shame if they left it at just these two shows.

Travis played Writing To Reach You, The Fear, As You Are, Driftwood, The Last Laugh Of The Laughter, Turn, Why Does It Always Rain On Me, Luv, She's So Strange, Slide Show, Blue Flashing Lights, More Than Us, Last Train, Side, Reoffender, Where You Stand, Closer, Coming Around, Flowers In The Window, U16 Girls and Sing.

She Drew The Gun's official site can be found here. They are also on Facebook, Twitter and Soundcloud.

Email ThisBlogThis!Share to TwitterShare to FacebookShare to Pinterest
Labels: She Drew The Gun, Travis