Reverend And The Makers - The Death Of A King 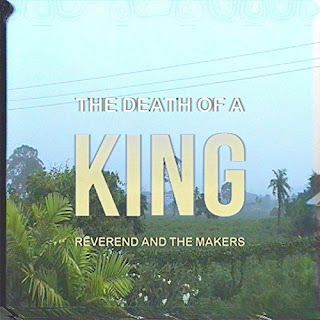 Reverend And The Makers' sixth album The Death Of A King is released this Friday and is their most diverse album yet. With vocal contributions from four of the band and real contrast between adjoining songs it's as much a fabulous mixtape as it is an album that ranks up there with their best.

The three singles that precde the album tell this tale for us. Joe Carnell sings Juliet Knows, Ed Cosens takes lead responsibility on Auld Reekie Blues and Rev himself on Too Tough To Die. Not to be outdone Laura takes the mic on the album's closer Black Flowers. The Death Of A King feels like a collective record which was the aim when the band relocated themselves to Bang Seray in Thailand, which has a cap doffed to it on the instrumental track named after it.

It's an album that skips its way through a real mix of styles and whilst there's nothing here as commercially direct as the likes of Heavyweight Champion Of The World, Silence Is Talking or Shine The Light, there's an immediacy to the songs that will make them firm favourites.

Miss Haversham may or may not be about our esteemed prime minister with talk of spitting words to the chosen few and demonstrating permafrost and shows Jon's lost none of his political edge. Auld Reekie Blues declares "I just want to be home with you", a million miles away from the hedonism of @reverend_makers, but it's delivered, backing vocals and all, with a warmth and sincerity that melts even the hardest of hearts.

There are plenty of hat tips to the Makers of old though; Too Tough To Die, with its fuzzy scuzzed up guitars and treated vocals, is classic Rev as is the Monkey See, Monkey Do. Black Cat feels like a communal jam, everyone having a role to play vocally and an almost out of tune brass backing that makes it almost impossible not to love it, whilst Juliet Knows has a seemingly effortless and simple style to it that definitely proves the old adage that less is quite often more.

Songs don't hang around either; only Too Tough To Die and the three songs in one Black Flowers exceed three minutes whilst Carlene is here and gone in just sixty seconds like a peak into a song rather than one in its own right.

John Earls, he of Planet Sound fame, commented along the lines that there would be a thousand thought pieces on this record if it was written by troubled kids from New York rather than a gang of gobby Sheffield lads and lass. That hits the nail on the head. There's no one out there making records like this and Jon's no nonsense blunt Yorkshireman social media style scares off the fragile egos of much of the mainstream music press. But as the sold out signs go up on the tour that supports the release of The Death Of A King, the proof is there that the Rev Army is still on the march.