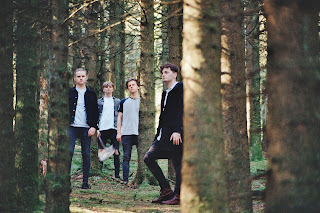 Jekyll are a Blackpool four-piece who've been growing a live following around the North West over the past couple of years. They're about to release their strongest single to date Mania and play a headline show at the Castle Hotel on October 7th. We got in touch for a chat to find out a little bit more about them, the single, the Blackpool music scene and their plans for the future.

Could you introduce Jekyll and tell us a little bit about how you got together?

We formed many years ago, through a mutual love of music and the shared desire to make music our living. In the time since, we have seen many bands come and go and, though we have faced lineup changes and many other testing times, we have persevered because this band is who we are and what we want to be.

Do you have one songwriter in the band or do you write together?

Joel tends to write quite fully formed songs at home which are then brought to the rest of us to make sense of and alter. Usually, we will spend the majority of our time perfecting the musical side of a song and then, right at the end, Joel adds lyrics.

Your new single is called Mania and out this week.  Could you tell us a little about it?

Mania is a favourite of ours and it always seems to blow people away live. Lyrically, the song depicts a scenario in which a person becomes obsessive about someone else and fears that their partner's ambition and drive will result in them being left behind. The song is, at times, disorientating and panicked, which, we feel, perfectly communicates the obsession and the insecurity that the song describes.

To coincide with the release of the song, we are also releasing a music video for it. Filmed in Lancashire with our mega talented media team, over a couple of weeks, it's our most ambitious video to date and we are extremely proud of it. Please keep an eye out for it on our social media!

And you're launching it with a gig at The Castle on October 7th. What can we expect from the live set - have you got more new material ready to release?

We are currently rehearsing for the Castle gig and are putting in everything to try and make it our best performance yet. Fans can expect a set list comprising some of our old favourites and even some brand new material. We are hoping that these shows really engage the crowd and make people desperate to come and see us again!

Following the release of Mania, we are fully prepared to release a couple more singles and then conclude with an EP sometime next year. We've been very busy this year and plan to give our audience as much as possible for them to enjoy in the coming months.

You're from Blackpool, a town with a rich musical heritage, but which has suffered like many towns as the music scene has shifted to the big cities.  Can you tell us a little about the local scene and are there any fellow Blackpool bands you'd recommend?

Blackpool was extremely useful to us, in the beginning, because it helped us to improve our live shows in front of a loyal local following. However, though there are people in Blackpool who really do want for good original music and do great things for the music scene there, the town itself is not great for original music to grow. Possibly because of its tourism and cabaret culture, the band's that do best in front of a blackpool crowd are always cover bands and, with the exception of a few venues and home-grown festivals, that's all the town has time for.

Despite this, there are some genuinely fantastic new bands coming out of blackpool right now. Our favourites are Avarus and The Slumdogs. We would definitely recommend you check both out!

What are your plans after the single release for the rest of the year and 2018?

As we said earlier, thanks to a very busy year of writing and recording, we are fully equipped to throw out a couple more singles and an EP in the coming months. Our aim is to constantly provide our audience with new, exciting music and play bigger and better shows all the way through 2018. Keep an eye out for our next single in the winter!

For those that don't know you, how would you best describe Jekyll?

Our sound has been described as a mix between doomed post-rock and catastrophic shoegaze, which we think is very accurate. We write songs with huge sonic landscapes that explore themes of jealousy, trust, human hurt and the want to be good person, constantly swapping between reverb-soaked introspection and riff-driven visceral intensity. Our sound is often compared to bands like Radiohead, Muse, Editors, Placebo and Nirvana.

Email ThisBlogThis!Share to TwitterShare to FacebookShare to Pinterest
Labels: Jekyll