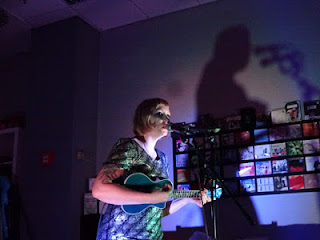 Our friends at German site Konzerttagebuch (Mein Zuhause, Mein Blog) caught up with She Makes War as she started off the German leg of her solo tour across Europe in Stuttgart on Saturday night. They've very kindly provided us with a translation of their review and access to their photos to share with our UK audience.

She's back again. While her latest album Direction of Travel is now almost 1.5 years old and musical travel adventures in Indonesia have been passed this summer, Laura Kidd is finally back in Germany as She Makes War. The gap between the concerts had been noticeably too long for me, so I didn't have to think long about whether it would be worth the trip to Stuttgart. There, her music was to be celebrated in a second hand shop near the S-Bahn - yet another new concert venue in my concert diary.

When I arrived, the soundcheck and the rearranging was still in full swing. It was raining outside in Stuttgart, but there was a lot of laughter inside. In the face of Brexit and the daily madness of politics in our countries and elsewhere it is so beautiful that trust and friendship to a whole number of people in Germany have developed. That's what Laura has reached honestly and I admire how she, as an independent musician, goes about her work unswervingly. It therefore felt particularly nice that the shop finally filled to the brim. 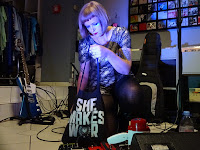 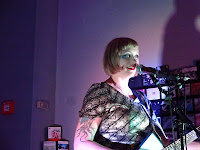 Laura started to spread her magic only "armed" with her ukulele on Time To Be Unkind. A rather quiet song and useful to test how much willingness to listen was in the audience or whether one or the other preferred to exchange news. To my surprise and joy, the silence of listening was almost instantly established and the people of Stuttgart proved to be a perfect audience: attentive and quite calm during the music and raving with applause as soon as a song faded away.

Laura wasn't so talkative at first, but for Please Don't there was a first little story for which I really like her concerts. The dry humour and down-to-earth attitude make her so wonderfully sympathetic to me. Shortly afterwards also for Delete - the evergreen, for whom she once again took a lap through the crowd, armed with the megaphone. Nostalgia had already warmed my heart again listening to a live performance of Delete (though our acquaintance is only three years old...) The Best (for which there is also a video from Karlsruhe from the first time I saw her) and Slow Puncture were two songs that have grown really dear to my heart.

I Want My Country Back (a new song) was also very impressive. But at here - finally - it became more than clear to me that it really is high time that I experienced these songs with band. This cracking song would have really deserved it. Do you think I'll have to fly to the UK for that?

She Makes War played Time To Be Unkind, Olympian, Drown Me Out, In Cold Blood, Please Don't, Delete, The Best, Slow Puncture, Undone, I Want My Country Back, Devastate Me, Paper Thin, Olympian 2, Dear Heart and Scared To Capsize.

The German version of the review can be found at Konzerttagebuch (Mein Zuhause. Mein Blog)