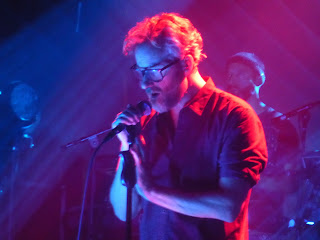 The first of The National's two nights at Manchester Apollo sold out in minutes, testament to just how far their star has risen in the last seven years since High Violet took them from one of the most underrated bands in the world to household names. With a number one album Sleep Well Beast under the belts, they returned to the Apollo as major league players with Australian duo Luluc as support.

Luluc are Zoe and Steve, an Australian duo currently resident in New York where they met The National. They're two albums in to their career, the last Passerby released on Sub Pop last year, but curiously they choose this tour to showcase songs they're writing for their unreleased third album that they're in the process of recording. It's a brave move, but one we'd applaud as it's forward looking and despite the cavernous venue and the fact that there's just two of them with guitars to fill it, their set is a real triumph. They're joined by Bryce for The National for two songs (and later they join in on backing vocals on Born To Beg) and finish their set with a wonderful cover of Bowie's Superman. 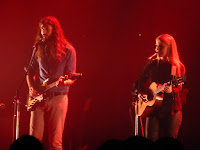 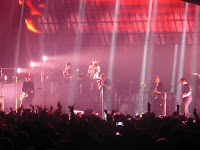 The National start their set with four songs from Sleep Well Beast. Despite it being an album that's best enjoyed on your own in a dark room so that the cloying claustrophobic magnificence of the record can envelop you, they manage to translate it into something that fills this room and holds the audience tight in their gaze. One reason is that you can't your eyes off Matt, he's living not just every word he sings, but every beat that his band mates are creating, often playing some imaginary instrumental and signalling to his in-ear engineer to get the mix exactly right. Expanded to an eight piece with the addition of two brass players to give these songs even more light and shade, these new songs are transported, if you close your eyes, back to your own personal space with every little bit of the intensity of the record amplified, as if, to coin their own lyric, you've been invited to a secret meeting in the basement of your brain. 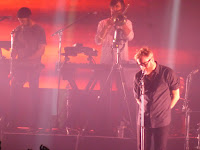 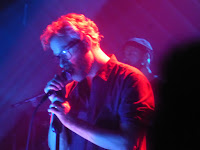 Even though the album entered the charts at number one, the response to the Sleep Well Beast material is probably the most muted. Not down to quality, but more familiarity and the fact it's a much more introspective record than the songs from High Violet, Boxer and Alligator. Bloodbuzz Ohio, Afraid Of Everyone, England and the final valedictory Terrible Love see Matt down on the barrier soaking in the adulation and thousands of pairs of hands in the air clapping in, and out of, time.

It's also noticeable that Fake Empire, Mr November and Apartment Story also generate a furious response from the crowd, as if the Beast songs, as well as those from Trouble Will Find Me, have internalised a fireball of energy and emotion that the faster songs flick the switch on and expel outwardly. Despite these songs being released at a time when The National were still in Academy 2 and 3, everyone seems to know these songs better than those from the number one album.

The most wonderful thing about The National's success is that it hasn't changed them one bit. Like REM did and a world away from Elbow who followed a similar early trajectory before a breakthrough album, they continue to follow their own path, almost immune to the fact that their audience has expanded multiple times over. There's no arm waving crowd participation moments, pointless proclamations or setlist selections just to please the casual listener, just a reliance on the music to deliver their message. The intensity of small shows they did a decade or more ago is still there and they retain the humility of a band who knows where they've come from. Matt dedicates two songs to Bernie, their host when they were a struggling band touring the UK and relying on hosts to put them up rather than hotels, they stop the set when they're alerted to a guy who's fainted mid-song and he also almost whispers to us that most of their favourite bands come from here. 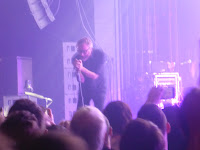 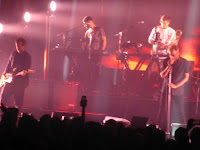 Watching The National is an intensely personal experience, one that's hard to express in words, they let you into their world and allow you to lose yourself in it to the point that you walk out remembering little of the detail but everything about the exhilarating feelings you've just gone through. At the end of the show you're emotionally drained by the experience in a way that only a very small few bands can ever even dare to dream of doing. That they can still achieve this whilst expanding the scale of their operation to the point where they draw in those who are here to hear one or two songs they heard on the radio is something that most mortal bands would struggle to even come close to achieving, but The National are no ordinary band.

The National played Nobody Else Will Be There, The System Only Dreams in Total Darkness, Walk It Back, Guilty Party, Don’t Swallow The Cap, Bloodbuzz Ohio, Afraid Of Everyone, Empire Line, Turtleneck, I Need My Girl, This Is The Last Time, Apartment Story, Hard To Find, Lemonworld, Conversation 16, Carin At The Liquor Store, England, Day I Die, Fake Empire, Born To Beg, Slow Show, Mr. November and Terrible Love

Email ThisBlogThis!Share to TwitterShare to FacebookShare to Pinterest
Labels: Luluc, The National