Shore - From The Start EP 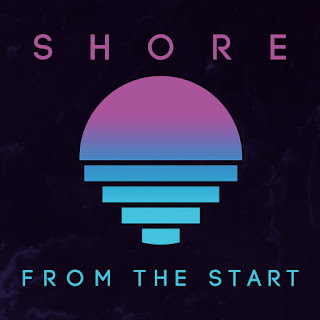 Shore's debut EP From The Start is an impressive first outing from the Swindon four-piece who only made their live debut in July. Across five tracks they mark themselves out as a band brimming with potential whilst delivering an EP that stands tall in its own right.

Opening track Warm It Up sets out Shore's stall early. Jangly, but not too jangly mind, guitars complement Harry's slightly world-weary wistful voice and lyrics that pick over love and life with a battered romanticism that traces its lifeline through most of the great English indie pop bands of the past few decades back to The Smiths - "here I go again on my own, my room's so cold, warm it up for me" and "your scent in the air, it sticks to everything I wear". It's delivered with a vocal that emphasises the emotional vulnerability of the words but with an underlying optimism, particularly when the backing vocals kick in.

Miles tells the story of a teenage couple trying to maintain a long distance relationship into their twenties and clinging on for dear life - "it's not as if they're neighbours through a fence" - as the guy comes to the realisation it's not working and needs to end it. Once again the band provide a rich canvas for the story, guitars darting in and out as it reaches the girl's conclusion of "a tear departing tumbles down her nose, she screams I saw it coming in my dreams."

Drive is similarly steeped in that bruised emotional turmoil - "there's a war in my head" - but on this track the band take centre stage and the song departs off on a wave of the sort of uplifting guitars that cross the divide between single bedsit land and the sort of emotions that lie deep in the hearts of most of us. Drove Road is similarly driven by what at first feels like an unremarkable guitar hook, but which by the second verse has embedded itself in your brain whilst Harry once again muses about first experiences in life and leaving things behind through "a decade of observation." He's singing about his own story, but like so many great lyricists, it's not too specific so that it feels like the situation can relate to your own memories too.

The EP concludes with the best song of the five. NDE lives in a flurry of uplifting vocal harmonies, an impassioned vocal delivery and a flurry of impatient insistent guitars that grow in intensity as the song progresses.

From The Start is one of the standout debut releases we've heard in a long time. Whilst it lacks a little in crispness of production, this does nothing more than focus the ear on the quality of the songwriting and the intuitive relationship between the four of them that comes across clear throughout. However, the lasting impression is of a band that has the capability to deliver much more in the future; these five nascent songs offer a glimpse of something more widescreen, more embellished yet emotionally resonant to people, suited to bigger stages and audiences than they're playing to now. They are very definitely a band to keep a very close eye on.

Shore are on Facebook and Twitter. Physical copies of the EP (limited to 100) can be purchased from their Bandcamp page.

Email ThisBlogThis!Share to TwitterShare to FacebookShare to Pinterest
Labels: Shore