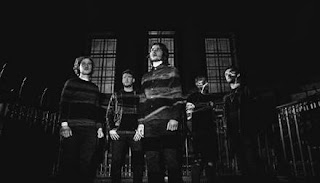 The Rah's new single The Time Is Now was released last week. It's the second self-released single of the year from the Edinburgh band through their own EH32 Records.

The band formed in 2013 and released a couple of EPs as well as touring with the likes of Scottish legends The View and The Fratellis. They took a break and returned in 2016 as a five-piece and released Sweet Talker earlier this year on EH32, their own label, a tribute to the seaside town of Prestonpans on the outskirts of Edinburgh from where they come.

This single starts with a spoken-word into urging the listener to take over now; it sets the scene for a song that is the perfect answer to anyone saying that there are no new bands making guitar music worth the description. It has a genuine anthemic quality to it, verses that build to a big chorus, complete with harmonies for the audience to sing along with and the simple proclamation of the song's title.

Email ThisBlogThis!Share to TwitterShare to FacebookShare to Pinterest
Labels: The Rah's