TRACK OF THE DAY : PINS - Serve The Rich 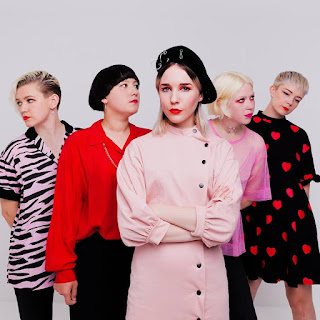 Serve The Rich is PINS' new single, set for release on limited edition pink vinyl 7" with a 2017 recording of their early track LUVU4LYF ahead of a series of headline dates and support slots with The Breeders across Europe.

Serve The Rich is one of the highlights of the new material PINS have been playing at recent live shows. The studio version is produced by Jamie Hince of The Kills and has a very back to basics feel to it that works brilliantly, the instrumentation is quite sparse and the production separates it so you can hear everything and it allows Faith's voice to take centre stage as she repeats the mantra "I'm only here to serve the rich, I'm only here to save the kids" throughout the song's two and a half minutes. It follows in the footsteps of their Bad Thing EP in signalling a more direct approach than on their previous album Wild Nights.

The 7" single, limited to 300, is available from the Haus Of Pins store and is released on October 20. The digital single, which is Serve The Rich only, is available now.