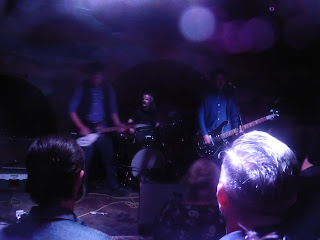 Ist Ist made their London debut on Saturday night at the Shacklewell Arms, a triumphant night that sets down a marker for them as they seek to spread the gospel as far and wide as they can ahead of this weekend's Head For The Hills headline slot in Ramsbottom and their October Gorilla headline in Manchester.

Many a time we've been to London gigs of out of town bands and the crowd's been fairly pitiful, but that's no issue for Ist Ist as they make their debut in the capital at the brilliant Shacklewell Arms, the sort of back-street venue that would be more than welcome back up in Manchester and which seem increasingly under threat across the country from developers searching for a quick buck with no thought for the cultural impact.

Things Will Never Be The Same Again is a powerful statement as an opener. It dismisses any notion the unfamiliar might have that Ist Ist could just be another run of the mill band. It's seven minutes of glorious noise that sweeps the crowd off their feet and gets them moving. Its lyric is a simple one - a repetition of the title over and over again, at varying levels of ferocity as the three of them create a noise that thirty pretenders to the rock throne would struggle to make. The crowd, a mix of those who've waited patiently for them to venture down south, an inebriated mask wearing crowd with random words scrawled on their arms that have come down from Manchester, and the merely curious are blown away. Whilst they play at home with a stunning light and strobe show, this actually feels somehow more powerful, more raw and base without it.

There are moments though where Ist Ist sound like they should be playing huge rooms. Their four-pronged singles assault of the last two years - White Swan, Night's Arm, Silence and Strangers - possess the anthemic power, bludgeoning melody and reach that bands that straddle the charts could only hope to summon whilst Emily and their new song Right Before Your Eyes pack a similar punch to the senses. They've got their more experimental side as well - Ghost and 7 are inventive, noise led, awkwardly structured songs that pummel and batter the senses into submission by refusing to play by the rules of the verse-chorus-verse game, whilst their set-closing Diversion delivers the knockout blow as Joel finishes stood up arms aloft under the arch he's been hidden in at the back of the stage

The reception they get tells its own story. Of course Ist Ist won't be everyone's cup of tea as they'll be too loud, too ferocious for some who want something nice and pretty to listen to, but there isn't a band out there at the moment that can quite set the pulses racing and the adrenaline flowing whilst ripping your ears off and leaving their indelible mark on your senses.

They headline the second stage at Ramsbottom Head For The Hills Festival (16) and Manchester Gorilla (October 14 - tickets).