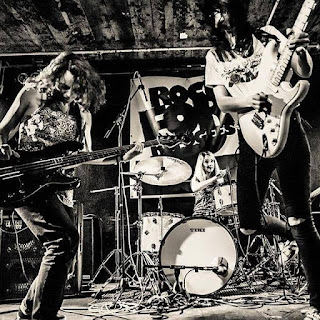 Berries are one of the most-talked about new bands in the country at present. Following on the back of their debut Those Funny Things EP and great reviews for their live shows, both in London and on their travels in Manchester and Sheffield, they've just released Wild Vow as the first taster of their second EP. They head north again on Sunday for a slot at Head For The Hills Festival in Ramsbottom. We caught up with Holly for a chat to find out more about them.

First of all, could you introduce Berries and how you got together?

We are a London based 3 piece rock band! Me and Lauren have known each other since we were about 14 and always loved the same style/bands so we used to meet up and jam a lot, Lauren originally played guitar too and we both played in separate bands but often shared the same bill! It wasn't until we both moved to London, Lauren took up bass we met Lucie and we decided to start BERRIES!!

How would you describe Berries to someone who hasn't heard you before?

I think we will use a quote to answer this one, when listening to our track 'Siren' someone once described it as being similar to 'a purple velvet elephant walking into your room and slapping you about a little with its trunk'.

You're playing Ramsbottom Head For The Hills festival later this month. Are you looking forward to playing there?

Absolutely! Festivals are always tonnes of fun and it's always great to meet/watch the other acts on the bill! Heard a lot of good things about Ramsbottom and there are some great bands playing so we can't wait!

You've had a great reception up North, first playing to a packed room at When In Manchester in April and then recently at Soup Kitchen as well as two really well received sets at Tramlines. How does it feel travelling that far from home and seeing a room full of people there to see you?

It's crazy! We absolutely love travelling to different cities and playing and the reaction has been fantastic! Sheffield and Manchester have brilliant music scenes so it's a massive treat to jump in and be a part of that!

Your most recent single was Wild Vow. Could you tell us a little about the song?

Wild Vow is definitely one of our favourite tracks to play live! We jammed around the idea of the track over the course of a couple of rehearsals and it all fell into place quite quickly, its always great when that happens! We wanted to push our style into a slightly heavier direction and keep the same instrumentally driven style that we love!

And how the idea for the video came about?

We are a DIY band so we didn't want to over complicate things with the video. We wanted it to be quite raw just to showcase us as a band. Loads of energy and rocking out in the studios where we rehearse.

You've been playing quite a few new songs in your set recently. Are these going to make up your second EP and when can we expect the next release?

Yes they are! We are going to be throwing some more singles out before we drop the completed EP so definitely watch this space!!

Do you write songs together as a band or does one of you come with an idea or a fully-formed song?

We mainly write all together which is great as everyone's influences really come across in the tracks and everyone always has loads of ideas, it helps keep things fresh and changing and we do love jamming!

As you're a London based band and we're 200 miles up the road in Manchester, are there any bands you know or have played with down there that we should check out?

There are so many, The Franklys are absolutely fantastic! Barricades are an alt/rock duo who blow us away every time we see them! Sisteray and The RPMS are really energetic live bands too with some great songs!!

What are your plans for the rest of the year and into 2018? Is a Berries album on the cards?

Lots of exciting things! Loads and loads of writing and gigging and lots and lots of new releases - we promise!!