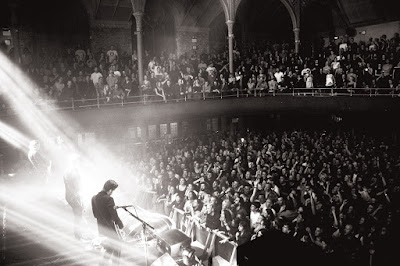 It's fifteen years since Interpol released their debut album Turn On The Bright Lights and, in what seems like is becoming the norm rather than a one-off for bands of that generation, they're touring to celebrate the album by playing it in full. For once though, this felt like something more than a tired easy win for the band as they brought it back to life and made it sound as fresh as the day it was released.

The Albert Hall is packed to capacity with it seemingly impossible to move and difficult to get a decent vantage point after people had been queuing for an hour after doors to get in. There's old heads here who remember the legendary show in the sadly long-gone Roadhouse the night before the album was released, but there's also a lot of younger fans in here who wouldn't have been around to witness the impact the album had. There feels like there's a lot of Manchester in the record, aside the lazy Joy Division comparisons which for the most part are misplaced, and it's no surprise that it made such a connection here. It's a connection that's still very much alive and well from the seconds it took the show to sell out to the roar that greeted them which is the loudest we've heard in this rather intimate venue that's way too small for the amount of people who wanted to witness it. 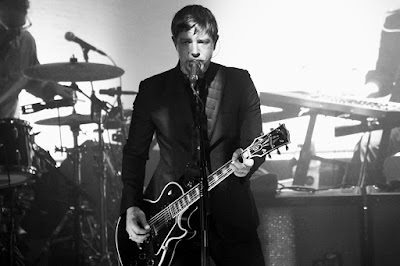 They start by playing the album in its entirety and it's immediately clear that the record is one that has stood the test of time and in these rarefied surroundings the sometimes claustrophobic production that was very much of its time is loosened a little which gives the songs more room to breathe properly and fill this spectacular hall. The sound is excellent, save for when Paul addresses us and we can hardly decipher his words, but with the separation between drums, keys, bass, guitars and vocals, there's a clarity that underlines just why Turn Out The Bright Lights is an important life-changing album to so many in the room (note - we actually prefer Antics, but we're probably in the minority).

At points in NYC and Stella... the crowd's sing along drowns out the band, the mosh pit starts off sedate, but by the end people are being pulled over the shoulders of the front rows as they're being crashed against the barrier at the same time, but at others there's a much more reflective contemplative response from the audience. It's an album that suits both for introspective dark evenings at home as well as these big celebratory shows where the lights are kept to a simple minimum and the music takes centre stage. It's also a record that is more than the sum of its parts. So often the word classic album is used for a record that starts with three big singles and then tails off. Like all the very greatest albums, you can tell, and tonight confirms, that the track order here has been  meticulously thought out, and by playing an early EP track Specialist at the end of the main set after Leif Erikson shows that this even took precedence over the inclusion of songs of that high quality. 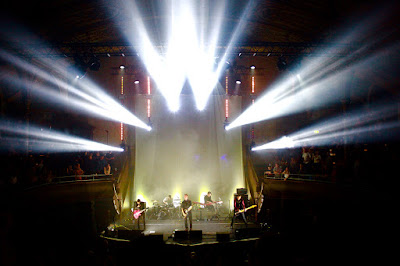 By opening with Untitled, the album's opener and the song that started so many shows back in the early days as the band was growing in popularity as the album weaved its magic, it does what these shows should do and takes people back in time. Where Interpol succeed tonight where many others fail with this format is that this doesn't feel like a lazy run through and even the absence of Carlos doesn't dim the fire that burns through the heart of songs like Say Hello To The Angels and the spectacular closing salute of Leif Erikson.

Interpol's legacy will go further than the songs they created although this album is destined to be talked about as one of the most important of its time, leading the way for the likes of The Killers, Editors, White Lies and closer to home The Slow Readers Club and Ist Ist. It's that more than the commercial success that will secure its place in history.

Like all these album shows, the audience would feel short-changed if there was just the album itself played and nothing else, so Interpol's encore, cut short from other gigs on tour because of the late start, takes in six songs that take up the story from Turn On The Bright Lights right up to the current day and a new song called Real Life that should feature on their next album scheduled for release as things stand for early next year. 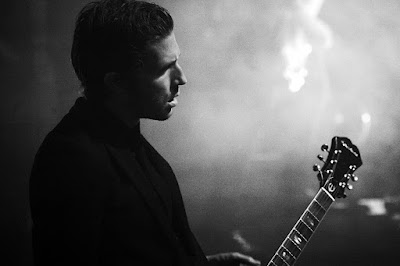 Fittingly three of the six extra songs, Not Even Jail, Slow Hands and the final glorious conclusion of the evening that is Evil come from the follow-up Antics and were songs that were first aired as the tour supporting Turn On The Bright Lights moved into its second and third year and the band's creative streak showed no signs of dissipating.

The Heinrich Maneuver represents Our Love To Admire and All The Rage Back Home their last studio album to date El Pintor and both serve as a reminder that Interpol have not lost the ability to write these huge soaring songs that connect when the mood takes them. Real Life won't surprise anyone or necessarily convert millions to the cause, but it will delight the hardcore that they aren't going off at some strange tangent and walking away from what makes them so adored.

Tonight though was all about Turn On The Bright Lights and a celebration of one of the most influential, and, at the risk of repeating ourselves, important albums of a time where music was starting to lose its way and needed to be knee jerked back on to the rails.