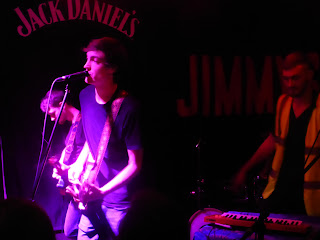 Purple Merlin are new kids on the block. With just one song to their name so far, the brilliant East Is West, the mysterious Stockport four-piece opened up This Feeling's club night at Jimmy's on Saturday and made quite the first impression with a wild, chaotic set that will make people stand up and take notice.

The opening band etiquette these days is to play your songs, not get in the way or knock the headliners' gear and try and smile politely whilst their mates talk over you. Purple Merlin don't really care for that bullshit. For starters, Jimmy's is already packed with their audience, a mix of family and more crucially friends who get them and contribute to the atmosphere they create. There's no pleasantries here, the guitarist almost has to be dragged off the stage at the end as he continues to play his own one man show.

Purple Merlin are a bit bonkers, one of them is wearing a hi-vis, one of them keeps shouting what sounds like United between songs in a fit of tourettes, they seem to take turns in attacking the drummer and his kit and the keyboard player somehow manages to coax sounds out of a keyboard that's precariously placed on a table on stage. Despite this though they create a riotous racket but one that's structured and knowing in the way Cabbage had seemingly got that market cornered. They're a very different proposition mind you, but the way in which cohesion manages to battle its way out of what could be a complete mess is very similar indeed.  A guitar breakdown midway through doesn't faze them in the slightest either, it just feels like a small respite before they go again.

They don't tell us things like song titles. There's a new one they wrote two days ago, which may or may not be called Weight In Gold, there's one that tells us "now you know" with an anger and direction that's frightening in the control of its delivery. Jimmy's is boiling hot, there's water dripping from the ceilings as their singer drops to his knees as the madness reigns around him.

The crowd love them and it's not hard to tell why. Purple Merlin are here to shake things up a bit. You'll be hearing a lot more from and about them.