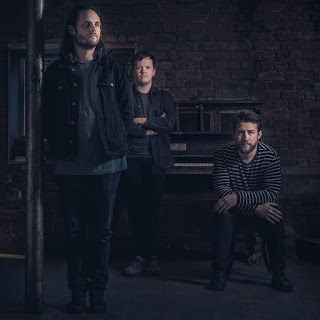 Ahead of their London debut this weekend and their Head For The Hills Ramsbottom Festival headline the week after and a massive show at Gorilla in Manchester in October, we caught up with Andy of Ist Ist to talk about their last eighteen months, new material and the biggest shows of their career to date.


It's eighteen months since we last interviewed Ist Ist.  What's happened to the band in that time?

The last time was just before the release of White Swan so a lot has happened. We've released three more singles and played some big shows. We played a raucous closing set at Ramsbottom Festival, sold out Sacred Trinity Church in Salford, finally took it the road and played in some new cities and announced a headline show at Gorilla which is as daunting as it is exciting.

One of things people love about Ist Ist is your unwillingness to compromise.  Whilst other bands dress and interact on social media in a way that makes them (think they) look cool, you steadfastly refuse to get drawn into such nonsense.  Is it important that music comes first and image should always be a secondary consideration?

Music should always come first. Surely that's why every kid picks up a guitar or a pair of drumsticks? To make music? Maybe the game has changed but I remember buying a bass guitar at 14 years old because I wanted to be in a band and make music, not because I wanted loads of followers on MySpace.

Image is important to us, no one wants to consciously look like shit, but it was never the reason we started this band. We're here to try and leave a musical legacy, even if it's a tiny footprint. Very few bands are remembered for of their image alone. If someone turns round in 25 years and says "Yeah I remember Ist Ist for their haircuts and shirts" or whatever, what does that say about the quality of the music we released?

Does the belated and deserved success of The Slow Readers Club give you hope that a band that isn't straight out of college still has a chance if they can get themselves heard above the noise?

Definitely. They haven't really had any significant industry interest and backing until recently and still don't seem to receive much media acclaim which is strange considering they pack out big venues up and down the country and have two very good albums out, Cavalcade especially. That's indicative of the way the majority of the music media operate though; they seem more interested in flash in the pan, fad music, not bands with real intrigue and substance. I like Slow Readers a lot, they make good music and graft their bollocks off. What they've got now is down to them and not really anyone else.

I read an interview with Matt Berninger of The National recently; he was saying how they used to rehearse in the room next door to Interpol. At that time New York bands like Interpol, The Strokes and the Yeah Yeah Yeahs burst onto the scene and "made it" rapidly in comparison to The National who only just got a Billboard #1 this year, despite them being around since 1999. I liked that a lot and I'd like to think maybe our beginnings are similar in that there'll never be some explosion, but we'll stick with it and try to stay on a steady upwards curve.

You've introduced a lot of new songs into your live set this year and dropped a few fan favourites whilst other bands will play the same eight to ten songs for two years until it becomes their debut album.  When you get there, you're going to have enough for several. Is that a conscious thing for the band to keep writing and playing new material?

We get restless, but we won't drop songs from the set unless we think the new material is definitely better. We probably swing too far that way sometimes and get rid of songs from the live set before we've given them a chance, but it feels that over the last 6 months or so we're getting a really solid, settled set.

A while back we were all convinced that an album was the next step but no-one is knocking on our door for it so what's the point right now? We're still evolving our sound, even after this long, but there will come a point where we'll have to commit a big body of work to record or we might never get round it.

You're off to London at the weekend to play your first ever show in the capital.  Are you excited to play to new audiences in new cities and do you think the capital is ready for you?

We can't wait. We were originally scheduled to play London in May but we had some difficulties and had to rearrange it, so we've been really excited to finally play there. I don't think they're ready for it. I doubt many people there will have seen us before so the only songs they might know are the singles available online, unless they've trawled through YouTube to find clips of us playing live.

You're headlining the second stage at Ramsbottom Head For The Hills Festival this year on the Saturday night after headlining the third stage on the Sunday last year.  What can people expect this year when it's gone dark in that tent?

It could be mayhem. We're going to be loud and the customary bright white light show will be happening. Last year we played the smallest tent on the Sunday and it was packed out, so you'd think the second stage on a Saturday could be even busier. Let's see. Ramsbottom last year might still be the best show we've done to date.

Does that excite you, the prospect of you playing to an audience that are in the main unlikely to know what's just about to hit them?

Definitely. I don't think many people in the audience know what to expect, unless they've come specifically to see us, and it's interesting to see the reaction after the first song or two when people realise what's happening. We love to play festival shows because the audience is there for the taking. We picked up a lot of fans from Ramsbottom last year, people who've come to a lot of our shows since. It's a music lovers music festival. Hopefully that'll be the same again this year.

After that, you've got your own headline show at Gorilla on October 14th. That's a massive step up in size and scale for you.  What was the thinking behind going for such a huge show for an unsigned band?

It was a bit of a case of stick or twist. We felt that we maybe didn't have a great deal to prove in the smaller, basement and club venues in town. It might sound arrogant, it's not, but that's how we felt. Doing this is an effort to set ourselves apart. We just felt as though we should do our best to make that step up and try and make a real impact playing a bigger venue. It could fall down and we might realise we've bitten off more than we can chew right now, but there was only one way to find out.

We've got Control Of The Going and Urban Theory on the bill as support. It's an interesting dynamic but it'll work. Three very different bands. Control Of The Going are releasing their album soon so this is a big opportunity to play those songs in a huge space. It's a big statement for everyone involved. For us, being able to play such a great venue despite our music being somewhat niche validates what we're doing.

And will you have new material out to coincide with it?  For a band with so many songs at your fingertips, you've released fairly little so far.

Yes, definitely. The next single is a track we've not played live yet. White Swan and Silence were released before being gigged and they seemed to have more of an impact than Night's Arm and Strangers - songs people were familiar with because they'd been in the live set for a while.

We're conscious of the fact we've only released four singles. We don't gig prolifically and we don't release music prolifically either. We work hard though and we rehearse as much as any other band, if not more. It's just that we want things to be right when we play a show and we want to release the right music at the right time. We're not big believers in just gigging for the sake of it or releasing music for the sake of it. To us, it cheapens the whole thing.

There's also been a lot of fan chatter about a song called Rats and it's become something of an in-joke between yourselves and your fans.  Do you really hate the song as much as you proclaim to?

No. That's not to say it's secretly a favourite of ours though. We wrote it as a bit of a throwaway, thrashy song. That was all it was ever intended to be but people latched onto it. We'd rather have people shouting for Rats at shows though than stood there in silence not being bothered about what we play.

What are your plans after Gorilla?

The only plans we have are loose ones, nothing set in stone. We've been putting all our efforts into the run of dates we had starting last month which culminate with London, Ramsbottom Festival and Gorilla; we want to hit our best form for those shows. I doubt we'll be going away into hiding afterwards, we'll be out gigging, but maybe this is the point where we really take it up a level and get to show wider audiences what we're about. I think we deserve it.