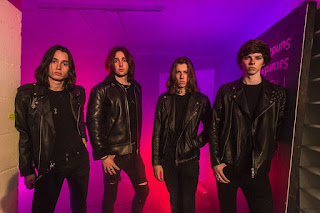 Carnival Club are a new band that have been making waves in Manchester and further afield over the past twelve months having broken on to the scene seemingly out of nowhere first with single House Of Cards and then their debut 12"/ CD EP Magdalena's Cape and some stunning headline live shows that belied their short existence as a band. After a summer of festivals they're back with a new single called Follow The Sun that they're launching at Rebellion Bar in Manchester on Saturday. We had a chat with front man Kai about the band, the new single and give you a sneak preview of the song that will win them a whole load of new followers.

First of all can you introduce Carnival Club and tell us a little bit about how you got together?

Carnival Club is the product of two different music projects from last year. Joe was in a band with George and Eddie that didn’t result in any live shows or recordings and started to fizzle out. Then I (Kai) met Joe out around Manchester and decided to get something going, when we found that we had something good going we introduced Eddie and George into things. We went to the studio before we even practised or got to know each other- it was ON from the get go.

Do you have one main songwriter or do you write together as a band?

I (Kai) normally write the basic back bone of a song on an acoustic at home then take it to Eddie to structure it thoroughly. When its a basic song we take it to the other two to let them write their own parts to it, and it starts sounding like us.

Your debut release was a 12" vinyl release Magdalena's Cape. Most bands content themselves with digital singles so that's a pretty bold statement. What was the thinking behind that?

We were lucky enough for the old Stone Roses manager Steve Adj to introduce to a man called Mike Darby to us from Bristol who wanted to start up a small record label called “Demolition Diner Records”. When Mike heard the EP he wanted nothing more but to release it himself and press it onto vinyl. We can’t thank him enough for his help.

Your new single is Follow The Sun. Could you tell us a little about what it's about and what inspired you to write it?

Follow The Sun is our stadium anthem, the one we hope everyone will sing along to. Its really a pop song soaked in Carnival Club. The song is about not dwelling on the past, and moving on from things that are only ever going lower yourself.

Will it be getting a vinyl release like Magdalena's Cape?

We won’t be releasing any 7 inch vinyl on this but there are future plans in the pipeline.

You're a Manchester based band but you're already playing gigs around the country. What sort of reaction have you been getting and have you any favourite places to play?

Strangely enough we’ve been lucky enough to be accepted everywhere we have played. Everyone really gets their teeth into us because we attract a wider range of listeners. We have gigs that cater to 15 - 60. We love the reactions on everyones faces.

What are your plans and ambitions beyond the single and into 2018?

Our plan for 2018, is to grow as much as possible. We want to play bigger shows every time, we're impatient. There are potential headlines and releases in the new year to look out for also.

Finally, if you had to describe Carnival Club to someone who had never heard of you, where would you start?

Carnival Club in a few words would be dirty rock n roll soaked in sci fi.