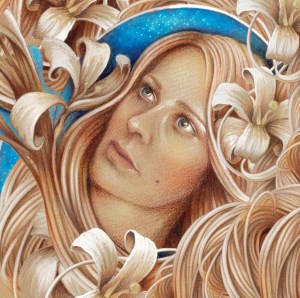 Hannah Nicholson's debut four-track EP Breath is a real statement of intent for a first solo release. Her voice takes centre stage throughout the four songs that deal with emotional turmoil and upheaval and pose as many questions than they answer.

Oliver opens with a sombre sounding keyboard introduction until Hannah's voice, backed with harmonies dancing in the background, declares "what do you want me for, am I just someone to hold?" The song is full of stop / start pauses, which add to the impact of the song, and which serve to emphasize the drama. Right at the centre is Hannah's voice though, often only given a supporting role in her previous Bird To Beast project, whilst here it's the show-stopper, effortlessly jumping from one style to the next as if it's the conductor dictating the song.

That theme is one that continues throughout the EP. On Jasmine there's just a simple keyboard line for accompaniment for most of the song, but nothing else is needed as it would just take away from the breathtaking impact of the naked beauty of the voice. There's no studio trickery at play here, just an immaculate control of the voice as an instrument to deliver the desired effect, which is to draw in the listener and leave them blissfully mesmerised.

Crazy has that same hypnotic feel to it, as Hannah declares with an unashamed clarity to a lover "you make me crazy, with one touch, one touch, makes me weak", almost as if she is unaware that is exactly the impact her voice has on the listener as it bewitches them. She could be singing the phone book at this point and it wouldn't matter, you'd be transfixed by addresses and dialling codes.

The title track Breath concludes the EP and it saves the best for last. "Oh this is hell for me, and heaven for you, I'd trade this pretty bitterness for a moment without you on my breath" is a cutting opening and it concludes with a beautifully orchestrated set of harmonies before Hannah declares with a hint of resignation "this is hell, somebody ring my bell."

Breath is an impressive first release from Hannah as a solo artist. Lyrically dark and confessional and displaying uncertainty and vulnerability it's an open and honest set of songs. However, it is the emotional depth, beauty and range of Hannah's voice that transforms them into something quite special.