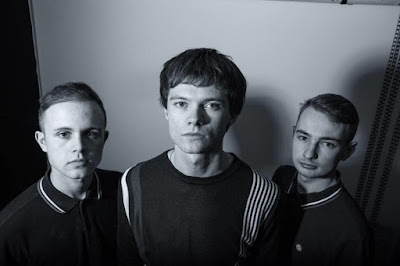 Kent's The Gallerys make their first visit to Manchester this weekend for a double header of shows, opening for Pinked Floyd at Academy 2 on Saturday and then performing an acoustic set in the Lambretta store at the Trafford Centre at 1pm on Sunday.  We caught up with them for a chat about coming up North and their local music scene.

First of all, can you introduce The Gallerys and where you're from?

The Gallerys are an alternative three piece band, from Kent in South East England.

How did you get together?

James (guitar) and Dan (drums) formed The Gallerys after meeting in college, originally with a different bass player who left the band due to university commitments. Craig was invited to an audition through a mutual family friend of Dan's. After the audition Craig was invited to join and form the final three piece line up.

You've released a three-track EP called Paisley earlier this year. Can you tell us a little bit about the songs on it?

The songs are inspired by real life events which can happen to anyone, at any time.

Paisley is a classic love song with three piece harmonies.

You Don't Really Love Her is about the injustice we sometimes see in supposed "loving" relationships and is a three part harmony driven track with clean guitars and melodic chords.

Imperfect Perception is a powerful, driven track about people constantly being distracted in their everyday lives, neglecting what's really important.

We write our songs about real life experiences because we want our fans to feel a personal connection to the music we play.

You're coming to Manchester this weekend for a couple of shows. Are you excited about playing to a new audience up North?

We're very excited to come up to Manchester. We played a show at the Cavern in Liverpool in May, and we love playing to brand new audiences who appreciate our tunes. It's always great to see new and old faces at gigs.

We have two quality shows this weekend in Manchester which we can't wait for. One at the Manchester Academy Saturday supporting Pinked Floyd, and one in the Lambretta store in the Trafford Centre Sunday.

Kent isn't seen as a musical hotspot. Do you think that hinders you in terms of getting gigs and having your music heard by a wider audience?

We certainly think of Kent as a musical hotspot. Having played all across Kent in the past year at brilliant venues like the Tunbridge Wells Forum, Hever Castle, the Duke of Marlborough and the Penny Theatre, we've amassed a very loyal local following. Our fans and music lovers in Kent always make the effort to come out and see some original live music, which is great for us because we can constantly expand our Kent fan base.

As much as we love playing in our home county, we do travel further afield frequently having visited Liverpool, Bristol, Cambridge, Oxford, Portsmouth and London to name a few in the past year which has definitely helped grow a bit of a national following as well as local.

What are your plans for the rest of the year and 2018?

We have 20 gigs lined up from now till the end of the year which includes supporting The Skints, Madness, From the Jam, as well as shows in Kent and across the UK.

We have a few surprises to announce later on in 2017, which we can't wait to share with our fans.

For someone who's reading this and never heard your music, how would you describe The Gallerys?

The Gallerys are an energetic, tight, powerful three piece who combine their 60s rock, Britpop and new wave influences to pioneer a fresh alternative style for modern day.