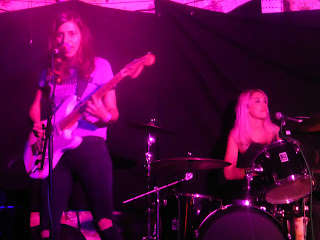 Berries made their return to Manchester following a successful well-received set at April's When In Manchester Festival for an opening slot at Proletariat's sold out Soup Kitchen show. With tracks from their debut Those Funny Things EP and, crucially, a set of new songs that should see the light of day in the not too distant future, they demonstrated that they're one of the most exciting new bands around.

Opening up a show like this is a difficult one, it's a celebration of Proletariat's growing success, but for a support band from out of town you're faced with a partisan crowd or no crowd at all. Berries don't let that bother them though, they're here to impress and they do just that, even if some of the crowd appear to dismiss them for the simple fact that they're not men. They know their following is growing on the basis of word of mouth from people who do pay attention and it feels like there's a building momentum as they prepare for the release of their second EP.

They play four as yet unreleased tracks that we suspect will make up that EP as well as the lead track Wild Vow that finishes their set. What you look for in a band is their willingness to progress their sound and Berries are doing just that. The angular approach they took to the songs on the debut EP - with Sirens, Those Funny Things and Waiting are represented tonight - is expanded and fleshed out on the new songs, of which Faults and Discreetly are highlights.

Even in the short time since their April gig, you can see how far Berries have developed as a live band now. There's a natural energy and love of playing live that's immediately apparent, they're not just here to impress but to have fun doing it as well. Holly and Lauren strut and prowl their way around the stage, lost in the music and masses of hair during the instrumental sections of the songs whilst you suspect Lucie would join them from behind the drums if she could.

They're loud, direct and in your face, like all the best rock bands are, as tonight's set proves all too well yet these songs have melodies and lyrics that you can relate to (female or male). Berries are ready and primed to break down walls and smash glass ceilings and you're not going to be able to stop them.