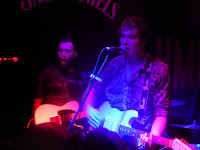 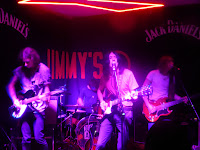 Jordan Allen returned to Jimmy’s, the scene of last week’s triumphant intimate gig, for a second helping to a packed sweaty enthusiastic crowd with the knowledge that they’re witnessing the relative calm just before the storm as he goes out on his first nationwide tour in the autumn. Support came from Leeds four-piece The Strawberries.


It’s been about a year that The Strawberries have been bubbling around preparing themselves for the break that their melody-laden songs clearly deserve. Live, the songs have a slightly harder edge to them than the recorded version, without compromising any of the immediacy that they possess. Old favourites such as She Rhymes To Get Away and the set-closing Laburnum House will be familiar to those who’ve followed their regular appearances in Manchester, but there’s a new song in the set that suggests that they’re continuing to progress in terms of songwriting without compromising the sound or the approach that has the crowd already packed in tight before they come on stage.

Sam’s stage presence is a big bonus for them, it gives them an energy and an engagement with the audience that bands often suffer from a lack of. They’re a band that clearly love what they’re doing and that transmits itself to a crowd that starts off not too familiar with them, but end the set feeling like old friends. 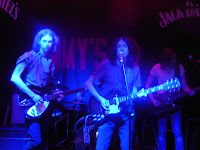 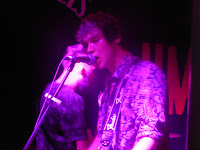 The room is properly packed by the time Jordan comes on, again testing the capability of Jimmy’s as a gig venue at full capacity. Despite this being the second show to go on sale, there’s no less enthusiasm or energy in the crowd that doesn’t stop singing along from the first to the end. It’s a celebration of just how far Jordan has come, with his best friends before he takes the next step. Many of them will know the places, situations and characters of Jordan’s close to home storytelling lyrics like Imperial Leather Drama which he tells us is about his hometown of Westhoughton.

If anything this week’s crowd is more vocal than last week’s, 110 Ways To Make Things Better is almost drowned out by the sound of it being sung back whilst Rosie once again steals the show. It’s the immediacy of the songs, the way in which the audience almost involuntarily find themselves immersed in them, which simply heightens the effect further and encourages the band to go for it even more. Set In Stone, Helter Skelter and Too Much Too Soon, whilst familiar to anyone with any knowledge of Jordan’s history, feel fresh and reinvigorated as if the new kids on the setlist block have laid down the gauntlet and they’ve responded accordingly.

The huge grins across the faces of the four of them at the end of each song reveals that they know just how far this journey could take them. It’s refreshing to see artists clearly enjoying what they’re doing and letting loose which makes them even more exciting than those that are already identikit early in their career. With a songwriter as socially aware as Jordan and a band that you feel are all capable of leading a band of their own, you could see them winning hearts and minds across the country.

Email ThisBlogThis!Share to TwitterShare to FacebookShare to Pinterest
Labels: Jordan Allen, The Strawberries