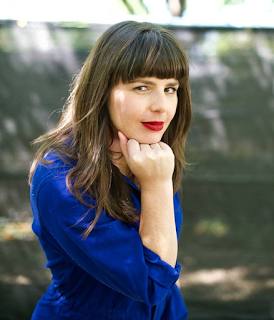 Beth Bombara's album Map And No Direction made it to number seven in our albums of the year in 2017. A chance find led us to dig back into a fairly substantial back catalogue of an artist who found a home in the UK with Brighton's At The Helm Records for this album. As a result Beth is making her first trip to the UK for a series of shows with Jaime Wyatt in February as well as an appearance at Americanafest on January 31st. We caught up with her for a chat before she set off on her travels to find out a little more about her and where she's looking forward to playing.

Could you tell us a little about yourself - where you’re from, where you’ve grown up and lived?

I’m from a town called Grand Rapids, Michigan, US. I grew up surrounded by the Great Lakes, and have fond memories of times spent at Lake Michigan. In the summer, we used to climb up the towering sand dunes. By the time we reached the top, we’d be completely out of breath. Then we’d sit down in the sand and slide all the way down to the bottom of the dune, and continue running straight into the lake. The winters brought lots of snow, so then we’d ski a lot. The average snowfall is about 2 meters every year.

These days, I call St. Louis, Missouri home. It’s a good place for a touring base, and it also has some special musical heritage. It currently plays host to The National Blues Museum. And, in case you’re wondering, there is 95% less snow in St. Louis :) I’ve also spent some time living near Oklahoma City, Oklahoma and a little time near Boston on the eastern coast of the US.

When did you first start playing music and did you ever consider you’d end up doing it for a living?

Music has always been a part of my life ever since I can remember. Growing up, there was a piano and guitar in the house, and at one point even a drum kit. It’s been something I’ve always had a curiosity for, so naturally, I learned all three of those instruments (even though the drums were supposed to be for my brother, but I just couldn’t resist them). When I was 16, I met some girls who wanted to start a band, and I’ve been in bands ever since then. There wasn’t a singular moment when I knew music was going be a career for me. I just kept playing, performing, and writing and that took on a life of its own, and well here we are now.

Could you tell us a little about your songwriting process and what fuels your lyrics?

It seems like songs have always come to me in fits and starts, but these days I try to be more intentional with my songwriting. Before, I would just wait for inspiration to strike. Now I’m kind of chasing after it. It’s a bit like gardening. You plant a seed, and you don’t see immediate results. You have to give it a little water, then a little sunlight. Eventually, it will sprout and grow into something beautiful, but it takes time and constant tending to.

People want to know if I write the words or music first. I’m definitely more of a melody person, so a lot of times the music comes first and the words take more time to coax onto the page. I’ve had songs where the music had been completed for a few years before I finally finished the lyrics. Those lyrics generally come from two places- inward reflection, or outward observation. Many times one song is a combination of the two.

Before Map and No Direction you’d already put out a significant body of work of EPs and albums. For those who’ve discovered you through this record where would you recommend someone start with those?

I’d say, start with the newest and work your way back chronologically. It’s an interesting journey of evolution in everything from songwriting, production, and genre all the way back to when I was recording DIY in my bedroom. I hope it’s similar to looking back through pictures of when you were a teenager - some of its slightly awkward but you can appreciate the growth that’s happened.

Map And No Direction contains a Dylan cover Blind Willie McTell. Is he a particular inspiration to you and who else did you grow up listening to who has influenced your songwriting?

I don’t remember hearing much other than classical and gospel music around the house growing up. Without the ease of things like iTunes or Spotify, I spent a lot of time at my local record store. At 15, I fell in love with the Clash and the Beatles (bringing Combat Rock and Sgt. Pepper tapes home from the record store). Then, it was CSNY,  Zeppelin, and Dylan, but it wasn’t until a little later on that I started listening to those artists in particular. Dylan has been such a force with his expansive career, and that alone is inspiration. I do look up to him as a songwriter, and I’m floored by the way his earlier songs became a voice for social movements in the early 60’s. That’s the power of a song.

Is there a particular meaning behind the title of Map And No Direction?

This one was born out of an internal struggle for me. I found myself in a dark space, trying to climb my way out. It really felt like I was holding a map, but there were no directional markers on it, rendering it useless. What do you do with a map you can’t make sense of? When you feel like you’re on the verge of figuring it out, but you just feel stuck? I quite literally wrote myself out of the darkness with that song.

Brighton label At The Helm have put out Map And No Direction and you’re about to embark on your first UK dates. How does it feel that people thousands of miles away have belief in you to put out your music and put on shows?

It feels unbelievably wonderful. It’s a big source of encouragement, and something that fuels me to keep creating.

Is there anywhere in particular you’re looking forward to playing?

Honestly, Glasgow :) I wish we had more time to explore the places we’ll be at.

Will these songs be solo or will you be bringing your band with you?

And will you be playing just tracks from Map And No Direction or delving back into previous releases or playing new material?

In addition to tracks from Map And No Direction, we’ll play songs from the two previous releases.

What are your plans for the rest of 2018. Are there plans to return to the UK for headline dates?

I’ll have some solo and band tours over in the US, and will be focusing on writing new material. No set plans for a UK return, but I think it’s likely towards the end of 2018.